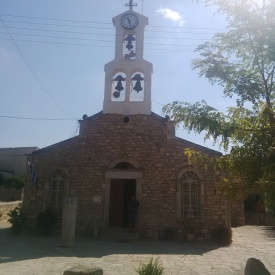 The next morning, we planned to visit some neighbouring ruins. We ended up in Ayii Deka, where 10 martyrs were executed around 250 AD. They have built a church at the exact site of their execution which has been standing for about 800 yrs, although the clock on the bell tower looks no older than 30 yrs to me.The church is in a little square where older buildings are in various degrees of disrepair. I popped my head into a doorway and had a nice chat with a man who was busy renovating or restoring the courtyard of a home for his sister in France to use. He told me the building was actually built in 1954 but the heritage society had found something that looked Roman on site, so that had caused a 4 yr delay in the reno. Never buy a heritage home, I say! But seriously, the house looked so old with stone and mortar construction, it was hard to distinguish it from some of the ruins.

We moved on to a large excavation site that would have been built around 250AD.  The area is clearly the site of a large town. The most important feature was the stone carvings that are an example of early civil law. The tablets deal with matters such as divorce, wills and how to treat slaves. Leon bought a book on the subject and I will have to read it more fully.  I surmised that the Romans took over the area at some point and decided to “civilize” the local residents and make sure law and order was kept. That is why they would have had the laws carved in stone.

The site contains a Byzantine cathedral and an odium, like a theatre. The olive trees are very old and seem to be arranged in a way to suggest a large plaza or boulevard. 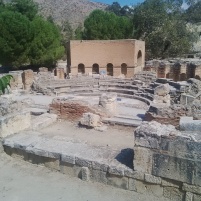 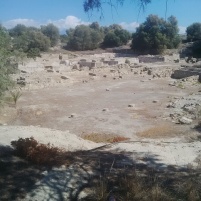 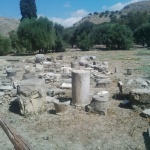 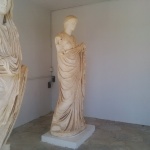 We wandered father on the other side of the current highway to find many more ruins in a large olive grove that is clearly still used by the local shepherd. Here, we found the temple of Apollo with large columns, many of which were still mostly intact. It was easy to see the detail that was put into this once magnificent building. 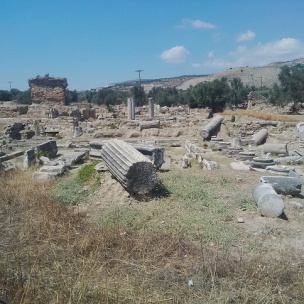 By now the day was very hot, so we headed back towards Matala, with a brief stop in Festos where the second most important Minoan palace on Crete can be found. We had a brief look from above the ruins and decided it was too hot to continue our explorations. By the time we got back to our hotel, it was close to 4pm and we were both ready for a cool drink and a swim in the pool. We spent the late afternoon there, planning our trip to Athens.

Dinner was down at the beachfront where we were serenaded by some Greek musicians. I’ve never heard Hotel California sung quite like that.

In the morning, we departed for Heraklion to return our car and catch our plane to Rhodes. We had hoped to visit Knossos today, but once again the line ups were long and slow. We then thought we might visit the Museum of Archaeology. After driving through the busy and narrow streets of the city, we gave up finding the place and headed to the beach outside town for a brief visit.