Twillingate is the English name for a town called Toulinguet by the French.  It is also known as Iceberg Alley, although we didn’t see any icebergs while we were visiting.  It’s a lovely cove town that was established by French and then English fishermen.  We stayed for 2 nights and had time to enjoy the great views, the fantastic weather and the sights. 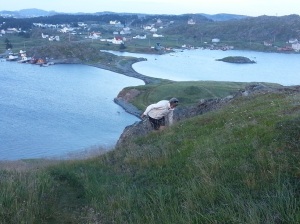 Our campground overlooked a small bay where we climbed the point on the first night there.  It was very windy but oddly, the wind was warm.  One Sunday, we took our bikes into town where we rode to the Auk winery known for its berry wines, including my new favourite, Bakeapple Iceberg wine.  Bakeapple is a local berry that tastes like nothing I can describe and the iceberg wine is actually made with water from melted icebergs.  The winery is located in the former schoolhouse and is decorated in the colours of the provincial bird, the puffin.  We didn’t buy any wines but we did try the ice cream which can be flavoured with the remnants of the berry mash that makes the wine.  Of course, I had the bakeapple ice cream.

The ride back was really hard between the hills and the wind, but it was good to get some exercise after hiding from the bugs for so many days.  We stopped at the local fish restaurant for 2 lobsters to take home to eat.  Of course the feast was delicious!

On Sunday, there was a caravan of RVs arriving.  Twenty or more RVs come from all over the US in an organized tour. Leon sat facing the entrance, enjoying a snack and wine while watching the RVs being parked, one by one.  He somehow looked like he was the parade master as many people stopped to chat with him.  In the meantime, I was cleaning the camper and doing laundry.  At one point, I looked over from the main office to find some woman sitting with him.  I teased him about how he was attracting all kinds of people while I was busy elsewhere.  The poor woman seemed to have confused Leon with someone else, so she sat down and chatted with him for a while.