We like to think we mingle very well with most people.  Once in a while we like to dress up and attend a gala, as you’ve seen on some of my posts of the Army Ball.  On this occasion, Leon decided that Roadie needed a tour of Beverly Hills.  We drove up and down some of the main areas, looking at some of the more modest homes.  I finally figured out that CYN on street signs meant Canyon and sure enough, there are a great number of canyon neighbourhoods in this exclusive area.

We drove around looking for Rodeo drive but our GPS, Meddling Maggie, could only find the residential part of it.  At one point, we drove up Beverly Hills Blvd and saw a great number of young people wearing a valet uniform in front of a house.  I suppose they were hired to park guests’ cars for an exclusive event. Leon and I wondered if we could be gate crashers and make them believe we were so famous that we travelled in an old camper and didn’t even use our real names on the guest list.  Maybe we watch too much tv?

At any rate, we were getting hungry and finding a park in the center of the Hills, we decided to park and eat lunch.  The park was actually filled with very average looking young parents and their children.  No celebrities in sight here.  That was perfect as the lunch menu for the day was peanut butter sandwiches and any cold drink we would buy from the Taco truck nearby.  I had a very nice chat with the truck operator in Spanish, well, sort of.  He told us many of the homes here looked modest but were worth millions.  We know all about that from living in Vancouver, right?  But seriously, he pointed out the house across from the park and said it was probably worth over $4M.  Ay Caramba! 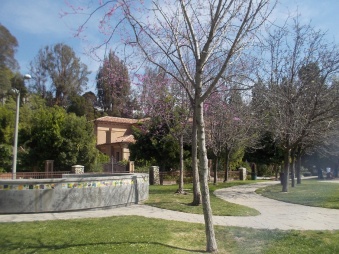 After our delicious lunch, we drove towards Hollywood to find “the sign”!  I had forgotten about the Walk of Fame with all the stars.  We thought it was front of a Chinese theatre but it turned out the theatre was actually Egyptian. Anyway, we found it along Hollywood Blvd.

Getting a good picture of the Hollywood sign was another challenge.  It took several turns from one street to another to finally get a clear shot.  I know, I could have gotten a better picture off the internet.  But this is my picture!

As we drove through Hollywood, I had the impression it was trendy but not so rich.  There were a few odd characters around, particularly at this intersection across from the Dolby Theatre, site of the Academy Award ceremony the following day.  I locked the doors and we drove on through the legendary LA traffic.  Between the smog and the traffic, I wouldn’t advise anyone to pack their bags and move to LA anytime soon. However, should either of my artistic children end up working in LA, you know I will be the first one to go visit! 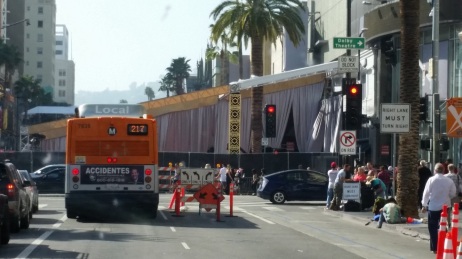 4 thoughts on “The Beverly Hillbillies”