On Friday, we drove south to the Keys!!!  Our destination was Key West and we made it easily, with a stop at Bahia Honda State Park.  What a great sandy beach!  And the water!  Amazing!!  We stopped to eat lunch and went for a walk on the long sandy beach.  This Key is close to the old Flagler Railway which was destroyed years ago in a hurricane.  The remaining bridge is pretty impressive.  Cars couldn’t fit on the same level as trains, so they built a road over the train bridge.

From Bahia Honda, it was an easy drive to Key West where our friend Helene and Lucien were waiting.  We met them 5 yrs ago while waiting to take the ferry from Newfoundland to St. Pierre and Miquelon.  Leon and Lucien were both Artillery guys and I remarked to Helene that they should meet.  Well they did and we had a great overnight stay in St. Pierre.  We’ve kept in touch over the years through my blog.  Lucien kept telling us to come visit them in Key West.  So this year, we did!

It’s pretty amazing when you haven’t seen people in 5 yrs and hardly know them, yet they are like old friends.  We were never at a loss for conversation in the 2 days we visited.  They live on the Navy base, where a campground is available for retired military personnel.  Lucien met us at the gate and we parked right beside their 5th wheel.

Over the 2 days, we visited Key West on foot, stopping at Malory Square for the sunset.  Leon and I were married in Key West in 2010, right in the middle of the waterway in front of Malory Square.  We are well acquainted with the area now.

Before sunset, we had time for a great dinner at a local restaurant.  The whole town was crowded with spring break merrymakers, but Lucien and Helene know the best spots.  I had the best steamed shrimp!  A whole pound of them.  Ok, I did share.  I gave Leon 4 of them.  My Cuban rum daiquiri was yummy too, but rather pricey. 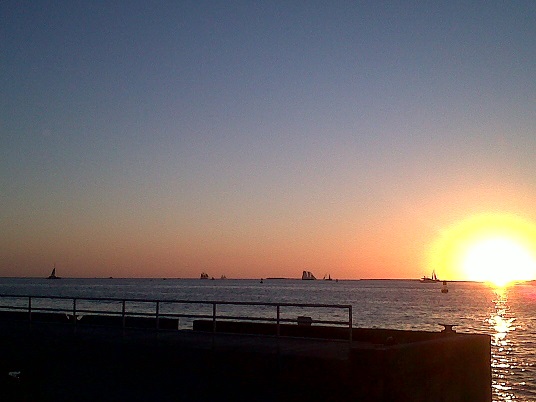