We left the California Coast for the California Desert, Desert Hot Springs to be precise.  My friend Loran was waiting for us there.  Loran only lives about 45 minutes from me in BC, but we never seem to be able to catch up with each other.  Today was the day!

We stayed at their RV resort, nestled in a wind tunnel in the Palm Springs region.  The bonus of staying in this area is definitely the hot springs.  When we arrived, I was actually able to put on my shorts for the first time this trip.  We went over to the pool, which is heated by the springs, and spent 2 hours just floating on a noodle while Loran and I caught up.  Bliss…

We were invited to the resort’s potato bake where a record-breaking huge potato is served to each of us with all kinds of toppings such as chili.  Yummo! The conversation flowed between Loran, her daughter Angela, Loran’s sister Sue and hubby Paul and of course Loran’s own hubby Paul.  It’s a good thing my husband’s name is Leon.  Such confusion could occur!

A few hours after I went to sleep, I heard the wind come up and remembered we had left our lawn chairs outside.  I quickly dressed and went to retrieve them before they blew into the neighbouring camper, or worse, the next state!

The next morning we woke up late and went over to say goodbye before we continued our trip down the road to Arizona.

About 4 hours later, we were pulling up to Bill and Emily’s home in Mesa, AZ.  Happy hour was already in progress and dinner was about to be served.  The sun was setting when we arrived and it got cold quickly, in relative terms of course.

Again, the conversation was lively and we stayed up by the fire talking until after 11pm.  The next morning, we enjoyed a soak in the hot tub while sipping on our hot drinks.  Then we joined Bill and Emily for a late breakfast before moving on.

Our plan was to make it to Las Cruces, NM, only 5 hours away.  However, we got to experience a dust storm.  The winds gust so high at times in the desert that they need to close the highway, which was exactly what happened that day.  We detoured north and stopped for the night in Safford, AZ.  I was sure we would be caught in snow due to the altitude, but it was actually quite warm, as we were sheltered by a large snow capped mountain. 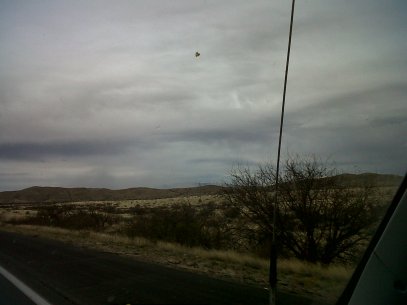 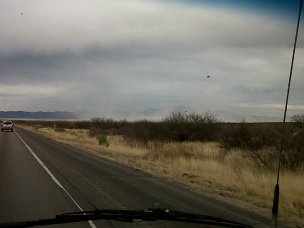 That night I went to put the garbage in the large bin in front of our camping spot.  I was holding my iPad along with a flashlight and the trash.  Of course as I put the trash into the bin, a part of my iPad case fell into the deep bin.  As I tried to retrieve it, the lid fell on my head and I almost fell in myself.  So much commotion!  I thought Leon would come out thinking there were raccoons about.  Did I tell you Leon was in the artillery?  It affected his hearing.

Back on the road the next morning, we drove southeast towards Interstate 10 where we finally got to New Mexico and crossed over into Texas.  It was not without much hard arm work by Leon as he held Roadie steady against the strong winds.  The storm was not over until 8pm that evening.  You should have seen all the RVs pulling into the campsite for the night in El Paso.

Luckily, I had all the makings of a nice dinner, so we stayed inside Roadie and enjoyed a quiet night. Yup, just me, Leon and a large load of laundry.  Glamping at its best!

4 thoughts on “The desert”

If ever there was a flower arrangement that @burlesquelightsaber could like, it's these dark Martha Washington geraniums with black leaf sweet potato vine. #hyggegarden #hyggelifestyle #mygarden