Leon and I attended what is often the highlight of our social season – the Army Ball.  The ball was celebrating its 10th anniversary with a WW1 theme.  For Leon, it was perhaps a bit like watching a seed you planted sprout and turn into a large vine.  He had been the Colonel who had brought the idea of an Army ball to Ottawa, modeling some of it on his experiences in BC.

There was a lot to commemorate last night – Canada’s answer to the call to join in defending our allies in WW1, which some think defined us as a new nation, as well as the 100th anniversary of 4 Canadian Regiments, notably The Princess Patricia’s Canadian Light Infantry, Le Royal 22e Régiment, The Royal Montreal Regiment and Le Régiment de Hull.

The weeks of preparation culminated in a great spectacle, from the arrival of guests and dignitaries at the Lac Leamy Hilton, where Royal Canadian Hussars, mounted on their horses, waited on each side of the entrance, along with sentries from the Royal 22e Régiment, on their bearskin hats, and several re-enactors in period costume, including my very own Leon, dressed in a WW1 Captain’s uniform, complete with very high, brand new, leather boots and his newly darkened handle-bar moustache.

Leon’s task for the evening included escorting some of the VIPs to the reception lounge.  I got to follow along which allowed me to meet the Lieutenant Governors of Quebec and Ontario, as well as the new US Ambassador to Canada and his wife – Bruce and Vicki Heyman.  Madame Ambassador is very friendly and insisted she photograph Leon and I in our period looks.  Actually, Leon was quite the media star for the first part of the evening, with several people asking to photograph him.

The evening proceeded with the usual dinner and entertainment in the ballroom.  The dinner had a particularly interesting dish, an oxtail terrine served in a sealed tin can, meant to be a nod to the canned meat the troops would have eaten in the trenches.

After dinner, Leon had a further responsibility to attend to, the distribution of a commemorative tins filled with Lindor chocolates.  The story behind the gift is as follows:

On Christmas day 1914, every person wearing the King’s Uniform received a brass box containing a Christmas card from Princess Royal Mary (daughter of King George V and Queen Mary), a bullet pencil and either chocolate, tobacco, cigarettes or spices.  The initiative was the idea of Princess Mary, then 17.  She appealed to the population to help fund these gifts with the following message –

“I want you now to help me to send a Christmas present from the whole of the nation to every sailor afloat and every soldier at the front.  I am sure that we should all be happier to feel that we had helped to send our little token of love and sympathy on Christmas morning, something that would be useful and of permanent value, and the making of which may be the means of providing employment in trades adversely affected by the war… Please will you help me?” 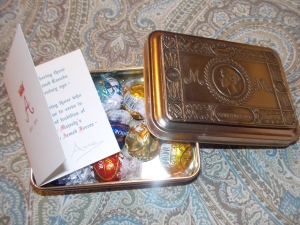 The gift each couple received last night was a tin with a substantial embossed lid on it.  Inside, there was a message from the current Princess Royal, Anne.  The card reads “Remembering those who served Canada a century ago.  Recognizing those who continue to serve in the finest tradition of Her Majesty’s Canadian Armed Forces.”  It is signed simply Anne.

As if this lovely evening wasn’t enough fanfare, we continued on with some dancing.  But first, Leon had to change into his version of James Bond.  He did away with the hot and uncomfortable uniform, washed and trimmed his mustache to its normal appearance and donned his black tux, complete with the Royal Artillery cummerbund. As for me, I added a vintage necklace and replaced the vintage style coat and gloves with a burned out velvet shawl to match my dress.  We partied on at the dance floor and in the after-ball party suite up on the 20th floor of the hotel.

It was a good time to speak more quietly to some friends and acquaintances, without the 1000 or so guests that attended the ball.  We were chatting with a lovely gentleman who is the Commanding Officer of the Algonquin Regiment when it struck me that I somehow knew the man from somewhere.  Well, I often get that feeling, but after a bit of probing, I figured out that Pat Bryden and I had known each other from Ottawa U, Faculty of Business.  What a small world this is!!

As lovely as the evening was, my poor feet couldn’t hold me up any longer, so we left the party around 1:30am and gratefully found our suite and king sized bed.  Unfortunately, I was too tired to take a picture of the lovely view of the Ottawa skyline at that hour.

I am not sure how you top this year’s Army ball.  Leon and I discussed that this morning as we were driving home from the hotel.  After 2 years of great themes complete with re-enactors, it`s hard to imagine how they can keep up this momentum.  I guess you’ll have to wait till next year to find out.

All the colours of the Caribbean Sea. Another baby blanket making its way to new parents. #hyggestyle #crochetersofinstagram #c2ccrochet #babyblanket