Day 3 in Rhodes, we decided to visit the beautiful coastal town of Lindos. The traditional houses look like sugar cubes below the Acropolis. It was far too busy to even park the car, and most of the town is closed to car traffic, so we took a few pictures from a nearby viewpoint and moved further south.

As a point of interest, Rhodes looks very different from east to west. We stayed on the more natural, wild West coast, where the sea is so turquoise but sometimes milky because of the current hitting the underwater rocks.  The east side, especially the northeast, is very touristy with many high rise hotels and resorts.  In the middle of the island, there are tall peaks, many of which are covered with pine forests.

The east side does have the advantage of very clear waters. On this day, we found a beach club just south of Lindos and swam and snorkeled. The sea was warm and clear. We could see many colourful fish right at our feet. The bottom is not sandy but rather filled with large rocks where the fish nibble at the algae and crabs and anemones can be found. Just a beautiful scene!

After a while, we moved further south after stopping for a yummy lunch at a seaside taverna. We drove around the bottom of the island and then back north towards our villa. The sea views were amazing! Along the way, we saw 2 medieval fortresses perched high on the rocks, overlooking the sea. These were the castles of Monolithos and Kritinia. I have to say that I think the colour of the sea and the amazing views easily rival those in the Caribbean. I am not sure pictures can capture the beauty. 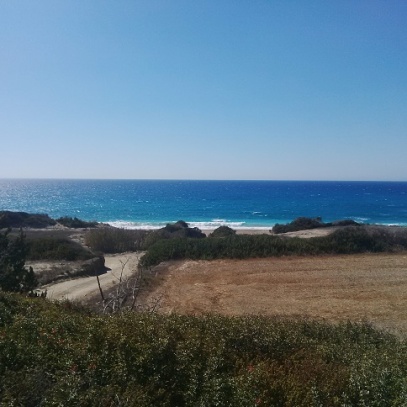 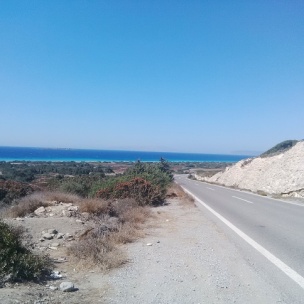 5 thoughts on “Rhodes, East to West, North to South”