We spent the weekend on a short trip to Quebec City and Mont Ste Anne.  After attending Trivia Night at my school till 10pm on Friday, Leon and I were still able to get up at 5am so we could be out of the house by 6am.  Quebec is a 5 hour drive from Ottawa.  Bradyn, having worked through the night 2 days earlier, decided to catch up on his sleep.

We got to Quebec around lunch time and realized the Carvanal was still on.  So off we went for a nice long stroll through the carnival grounds where we checked out the snow sculptures and ice fishing.  From there, we walked over to the Ice Palace of Bonhomme (the effigy for the carnival).  The line-up was too long, so we simply had a quick look at the outside.  From there, we stopped in the old city for a nice lunch at the local creperie.  My lunch was an asparagus and cheese crepe with hot cider.  Yum!

We walked over to the Chateau Frontenac and I spoke with an artisan who makes the traditional “ceinture fléchée“, a sash made by the coureurs des bois for holding their tools, but mostly for trading with the local First Nations for furs.  She explained that it took her about 100 hours to make a belt that would sell for $400.

We walked over to the Dufferin Terrace that overlooks the St. Lawrence River and Levis on the other side.  From there, we could see lower town, the restored Place Royale.  We took a short walk down many steps to that level to see the Gagnon brothers mural.  We walked back up the steep streets to our car parking at the Plains of Abraham park.

We checked into our cabin at the foot of Mont Ste Anne where we stayed snug for the night, anticipating our day of skiing.  Sunday morning, after a good breakfast, we drove over to the ski hill and got outfitted for the day.  It was Bradyn’s first time skiing.  We started with a couple of practice runs on the small ski school hill, then moved quickly to the long easy slope of La Familliale.  That hill is about 2km in length, plenty of time to practice.  At first Bradyn was a little unsteady, but he did very well as the day progressed.  The views of the Laurentians and the St. Lawrence are beautiful from up there.  It was hard for me not to get distracted.  As for my own skills, well it was obvious I needed to get back in shape after a long winter of struggling with a sore back, hip and feet.  My ski boots were doing nothing to help my technique and I am afraid I spent more time complaining than enjoying the outdoors. 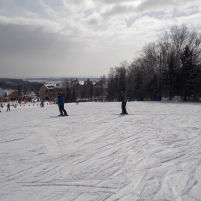 A bit of practice on the easy hill.

Now onto the big hill. 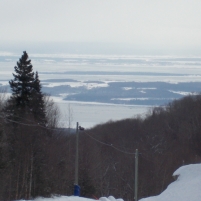 The hills near the shore of the St. Lawrence.

The weather was ideal, not too cold or windy.  The hills were not very crowded either.  We sat outside, at the bottom of the lifts and ate our homemade lunch.  After that, Leon and Bradyn decided to try the gondola up to the North side of the mountain.  We rode up and I stayed in the chalet while they tried one of the runs on that side.  Then we all skied back down the South side using a run that seemed so long, I wondered if my legs would hold out.  Someone told me it was actually 5 km long.  Well no wonder I was tired!

After a great day, Leon and I sat in the hot tub at the hotel and I took a short swim in the salt water pool.  The evening was spent watching the Olympics and reading on the internet.  Early to bed again.

This morning, we checked out and made our way to the Ice Hotel on the way home, stopping for a yummy breakfast (Bradyn has smoked meat eggs  benedict) on the way.  I’ll post pictures of the Ice Hotel next time.

Fall rhapsody in full force as we walked through the Mackenzie King estate, down to the falls. Then off to the Nordik spa for a blissful afternoon. The view from Champlain Lookout at sunset where we are having a picnic as it grows dark. What a perfect day!