We arrived in Labrador and drove to our planned destination of Red Bay, where Basques fishermen ran the world’s largest whaling station in the previous century.  And there we sited our first iceberg!!!  Granted, it was rather small, maybe the size of your backyard shed, but it was waiting for us to snap a few photos. 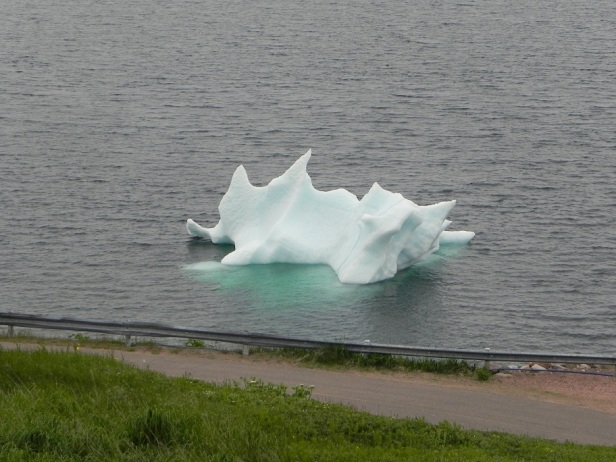 We tried to find a campsite for the night, but they are rare in that area, so we settled on the Pinware Provincial Park, which is in a gorgeous area, by the way.  The Pinware River is large and winds through high country, which is actually part of the Appalachian chain; old, worn mountains.  The terrain around here is mostly granite hills with a bit of greenery on it, lichen on rocks, low trees that have been whipped by the wind.  But our campsite was on the beach with a lush green shrubbery growth all around it.  I remarked to the clerk at the park that it was quite windy on the shore.  She answered that it was a good thing as it helped keep the flies away.  I reckon you would need gale-force winds to make any impression on those flies!!!  There were thousands of them, trying to enter any orifice they could.  We locked ourselves into the camper, killing any varmints that followed us in, and there were a couple of dozen.  Dinner was more fresh cod with boiled vegetables (I wasn’t going to set up a bbq in those conditions).  The view was terrific although the rain made the evening sky dreary.  I could hear the waves crashing this morning as I woke up at first light.  Quite delightful, really.  We also noticed that none of the campers that were using a tent, save one, were still around when we left in the morning.  The flies really make camping miserable around here. 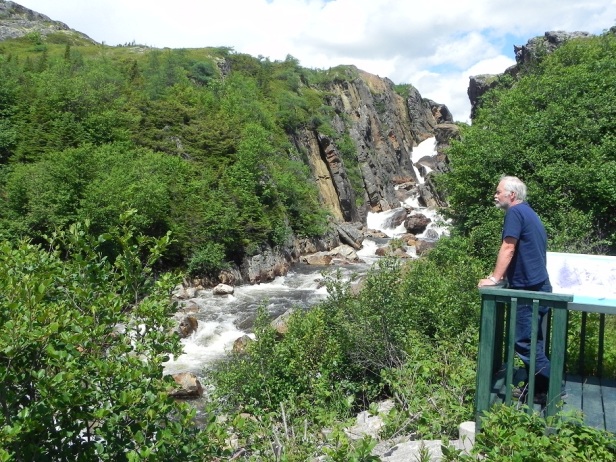 Having had my fill of Labrador and its pesky fauna, we decided to head for the ferry to catch the 10:30am boat.  Leon parked the van and I waited while he left to buy a ticket.  I read about 1/3 of my novel and still he didn’t return.  Just as I had locked up the camper and was heading for the terminal, he popped his head out to tell me he was still waiting.  It seems you have to get there really, really early to catch the ferry without a reservation.  As a matter of fact, one couple had a reservation and arrived after the terminal clerk had called “last call” (9:32am, to be precise…you get the idea on the kind of customer service this lady was offering).  So the poor couple, who had arrived with a reservation, having travelled all through Quebec and Labrador to get the ferry on their way home to beautiful, friendly Nova Scotia, had to wait in line for the ferry staff to figure out if there might be any extra room for their vehicle and the dozen or so others who were in line ahead of them (they must have arrived at 9:31am).  Needless to say, they did not get on the early ferry and had to wait for it to leave in order to purchase a ticket for the next crossing, because policy dictates that you cannot sell tickets while the ferry is still in port (???).  All the while, they tried to explain that they had a reservation, but the clerk would not even put them at the front of the line for the ticket purchases when they opened.  Sheesh!!!  Can you even spell “customer service”?

But there is a happy ending to the story.  We are presently in line for the 3:30pm ferry along with the nice people from Nova Scotia and many of our other ticket-line mates.  We’ve eaten a nice lunch in our camper, finished a good cup of tea and the sky might just clear up enough for us to get a lovely sunset again this evening or better yet, maybe we’ll see some Northern Lights?

All the colours of the Caribbean Sea. Another baby blanket making its way to new parents. #hyggestyle #crochetersofinstagram #c2ccrochet #babyblanket