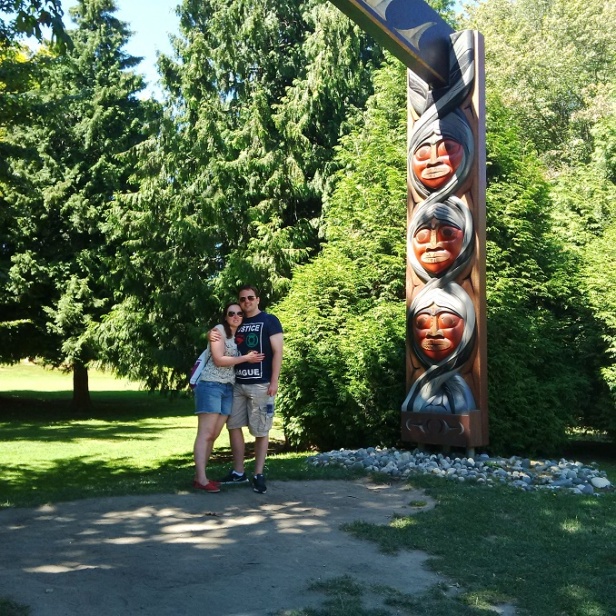 Well, it isn’t that I want to be telling someone else’s story, but I was with them for this adventure too, well for most of it.

On day 2, we went back to the city with the intention of visiting Stanley Park.  After a bit of discussion, we decide to walk around the seawall as Leon pointed out that it was only 8km (!!!).  The park has many attractions for all, including an aquarium, a totem pole park, many gorgeous views of Vancouver, lighthouses and a statue what we like to call the Little Mermaid (she is actually a Girl in a Wetsuit).  My goal was for us to walk to the other side of the park where there is a fine restaurant called the Teahouse.  The views are beautiful from there and we knew from a previous visit that the menu was appealing.  The building used to be Officers’ Mess the Artillery unit that was there to defend our coastline during WWII.

So off we went, walking along the wall, avoiding the many bicycles, stopping for countless pictures and enjoying great conversation.  Of course, I needed to stop regularly to find a ladies’ room, which at one point meant talking a big detour to get onto the upper loop to Prospect Point. Eventually, we made our way to the restaurant.  By then we had been walking for over 5 hours and 16,000 steps. That was the end of my walking journey for the day.

My dinner consisted of a long, cool mojito and a large salad with grilled salmon.  Quite yummy!  After dinner, the rest of the group walked back to the car while I waited for them to come around the park and pick me up.  The problem was that there was a fireworks display planned for the evening in English Bay.  Over 500,000 people poured into the vicinity that evening, roads were closed which limited exits from the park into the city.  Eventually, I walked back about 1.5km to meet with the car.  From the time they picked me up to the time we left the park, we were in traffic for about 1.5 hrs.  That was only driving maybe 3.5 kms.

The next day, Leon had planned a special treat for our visitors.  He took them to the Pride Parade where our Prime Minister would be marching along with many other MP and Liberals. I stayed home as I really don’t like the big crowds nor the long walk.

They went downtown and joined the other Liberal volunteers, all dressed in their red t-shirts.  At one point Justin Trudeau came by to say hello to everyone in the group and Sara managed to get a selfie with him.  Or maybe it was Justin who photobombed her?  Not too clear on the details… After that, the parade started and they walked along the route for about 1.5 hrs before stopping for a quick bite and heading home. 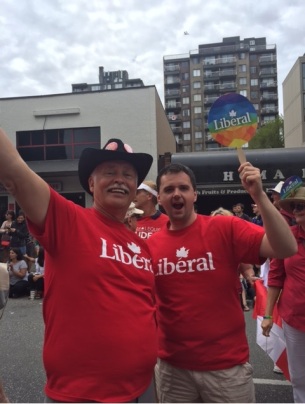 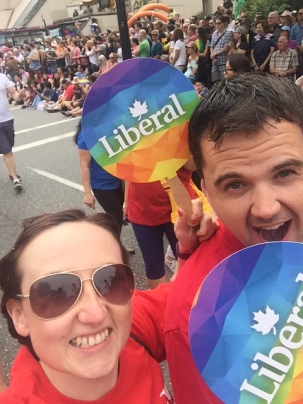 I was waiting with a nice dinner of locally produced sausages and vegetables, along with some peanut butter cookies I made, both regular and gluten free.  After dinner, we sat outside by the fire and talked late into the night.

One thought on “Sara and Stewart – the BC adventure continues”