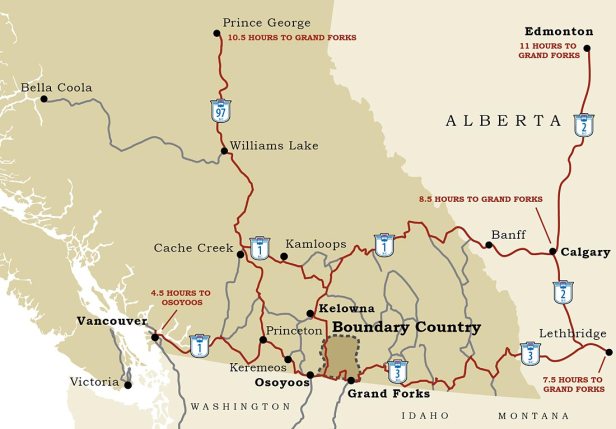 We started our Okanagan trip on Wednesday, driving from Langley to Kamloops via Cache Creek. Leon thought it would be a nice change to take a different route avoiding the Coquihalla Highway.  The day was sunny and warm.  I thought the air conditioning wasn’t working very well until we stopped in Ashcroft and the heat about knocked me over!  It was 33C on the thermometer but it felt like 36C.  The air is very dry up there at the top of the Fraser Canyon and Ashcroft is often one of the hottest towns in BC.

Driving east from there, we arrived in Kamloops to meet some friends, Sylvia and Al, for dinner and to stay the night.  The purpose of this trip was to see an old military friend of Leon’s, Eric, who recently called Leon to ask about an old ring he would like to have to be buried in.  Eric has giving this ring to Leon years ago, but with his recent failing health, he thought he would like to have it back.  Sweet old guy! So with that goal in mind, Leon contacted many of his friends in the Okanagan and we planned to stay with them during our travels.  Of course, the conversation between the men was centered on their military careers and old adventures.  Leon has created a yearbook for the Vancouver Artillery Association, 15th Field, with a huge amount of information including pictures and anecdotes from almost 100 yrs of history.  He is always looking for more pictures and stories to complete his website as we move closer to the 100th anniversary of the Regiment in 2020.

I found lots to talk about with the ladies over the weekend.  Sylvia and Al have travelled quite a bit recently, so we exchanged travel stories.

Day 2 of the trip took us to Vernon to meet the mythical Eric, a former Regimental Sergeant Major and his wife Sylvia.  Eric has suffered a few strokes so his memory is not what he would like it to be.  But we had been forewarned.  As we pulled into their housing development, I couldn’t help but feel the climate was much dryer than Langley.  I literally felt like I was in the desert.  Their home has a great backyard with a view of the mountains and Okanagan Lake.  Amazing the lake is so large!  We spent a couple of hours on the patio with Leon and Eric reminiscing under Sylvia’s watchful eye, then left with several photo albums and a large painting meant for donation to the Sergeant’s Mess in Vancouver. 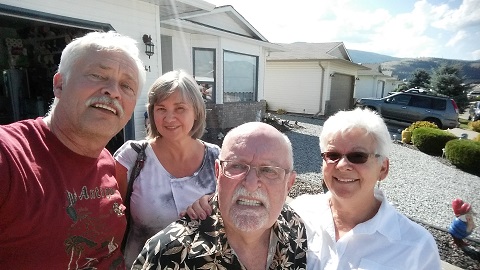 We drove on towards Kelowna and stopped for the night at Swan Lake, just outside Vernon.  Our campsite had a view of the lake, being waterfront.  We went for a swim in the pool to cool off and had a glass of wine and relaxed until the sun set late in the evening. The lake is completely quiet as no boats are on it and no swimming is present.  It seems the water is not very healthy due to agricultural runoff, so it is mostly populated with ducks and geese.  We got a great sunset and slept until late the next morning. 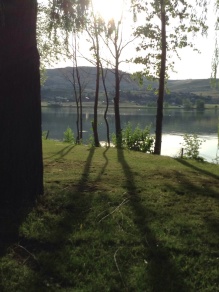