Leon and I have a running joke about how I want to go to Paris, but only want to go if he takes me.

We got up on Wednesday and enjoyed a nice long swim in the campground pool while we had our coffee.  Then we got organized so we could take the shuttle to the Vegas Strip.  We had 2 areas in mind.  The first was Freemont street where they have covered a good length of street with a roof that is used to project a light show after dark.  It also has ziplining from one end of the street to the other.

I forgot to say that we had spent an hour in the casino at Sam’s Town the night before.  We had a glass of wine at happy hour (2 glasses for $5) and spent $4 on the penny slot machines.  Leon was actually winning with his $1 bet at one point and I counselled him to cash out when he got to $3, but he wouldn’t listen.  I lost my $1 bet in about 3 minutes.  Casinos allow smoking in Vegas, so we never want to stay very long.  All this to say that we don’t really gamble and we don’t like being in casinos because of the smoke.

From Freemont street, we took a city bus to the main part of the strip, headed for the Venetian and the Paris hotels.  The bus ride took sooooo long!  But it gave us a chance to look at the local scenery.  We stopped in front of the Venetian and grabbed an iced tea at McDonalds while we watched people pass and visited the inside of some of the casinos and hotels.

Of course, there were the usual photo ops and we finally settled down for a cool drink at Harrah’s in the piano bar to listen to Big Elvis.  Obviously the crowd was very entertained by him.

What can I say about Las Vegas?  Not a whole lot you haven’t heard or read before.  It’s full of large hotels and casinos; people can drink on the streets; there are many buskers dressed in characters who earn tips by posing for pictures and the usual array of homeless people.

When we returned to Sam’s Town, we decided to go for a buffet dinner, as that seems to be the requisite meal in Vegas.  Of course the portions and selection were ridiculous.  The food was average and we ate too much.  The best thing about our stay was the pool and the lovely weather. Oh, and it seems Donald Trump was there on that day as well. We saw his jet at the airport on the day we drove around town.  First the Pope, now the Donald! 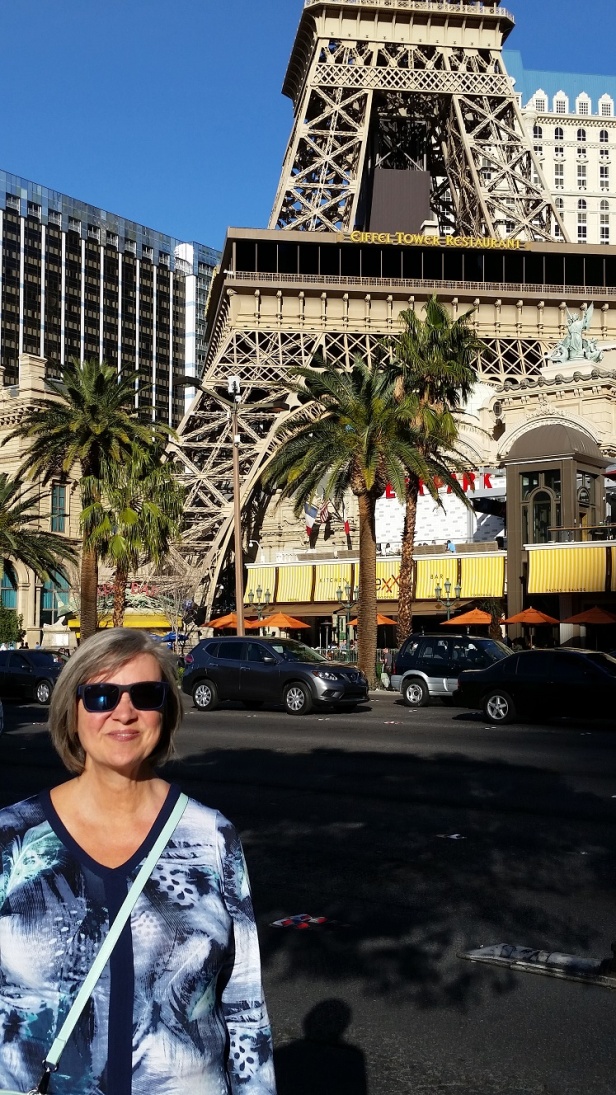 9 thoughts on “Leon finally took me to Paris!”