Well the days in Palm Springs are sunny and warm but the evenings sure get cool as soon as the sun sets.  If you are from the east as I am, you are used to humidity moderating the night air.  It is amazing how the heat of the sun wakes us up in the morning but as soon as the sun starts to drop, you had better have your jeans and a sweater on, and maybe socks and shoes, and a firepit…

Our friends Brent and Elaine know all about the climate here.  We were invited to spend a couple of days with them as our hosts for various activities.  On the first day, Elaine was going to an outdoor yoga session at Sunnylands, the Annenberg Estate.  Now here is a marvel of landscaping and architecture.  This large, exclusive estate was meant to look like a garden found on the east coast, complete with indoor and outdoor pools and a golf course.  The Annenbergs were very influential people who were close to both celebrities and statesmen. The estate will be hosting President Obama and other foreign dignitaries in a couple of weeks.

We took a walk around the now naturalized gardens of cacti and succulents.  That’s when Leon was “bitten” by a yucca plant.  I was dreaming about how I’d love to arrange plants the way they have them in these gardens. 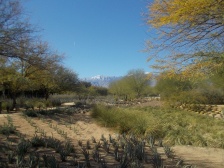 After the yoga, we returned to our RV resort for a swim and to get some much needed laundry done.  Actually, the laundry was supposed to take an hour or 2 but ended up eating up all of our afternoon.  So we did the sensible thing and asked our hosts to pick us up a bit later for dinner as we really wanted that swim!

Brent had just purchased a great propane powered firepit from Lowe’s.  Elaine put out the hors d’oeuvres and I helped with the cooking.  Dinner was grilled shrimp and scallops which they had purchased on a recent trip to Mexico.  By the time we sat down for dinner, it was well after 6pm and full dark outside.  We were prepared, wearing socks and shoes, as well as our warm jackets.  After dinner, Brent brought out the firepit and it was just such a delight.  I don’t think we would have sat outside into the night if it hadn’t been for the fire.

The next day we went to the College of the Desert Market.  It’s huge!  Lots and lots of stalls with any number of items for sale.  I bought a hat, a belt, some evening pants and a tunic.  We stopped for lunch and Leon and I shared Romanian sausage with fries and pesto. I wouldn’t normally be so adventurous in a food court, but being gluten-free sure makes you seek out the less common foods.  I found the sausages delicious. They were actually just sausage-shaped patties of beef and lamb with lots of garlic and spices. Yum! Before we left, I purchased some goodies for my sweet tooth – the freshest red licorice and some date treats that are so delicious.  I wish I had bought more of each.

We spent the afternoon by the pool again and got ready for dinner.  Our circle of friends grew as another army buddy of Leon’s, Paul, and his wife Sue joined us for dinner at Woody’s.  Brent had told us it was a hamburger place with a back room where a live band played jazz.  Interesting concept!

It turned out exactly as he described it.  The trio actually played old R & B classics while people drank beer, ate burgers and got up to dance sporadically.  Our table had its own little quirk. Everyone’s meal arrived but mine.  The waitress said she had put the orders in by couple so that mine was put in later.  I didn’t understand what she meant.  When my food finally arrived, Leon got his long awaited fries as well AND another burger.  So he ended up with 2 large hamburgers.  Let’s just say his tummy was very full that night.

The band played non-stop for over 2 hours and then finally took a break.  It seemed like a good time to leave to return to our humble abode.  We said goodnight to our friends and told them we would see them again in BC.

One thought on “Days in Palm Springs”

Chicken with artichokes and chickpeas, served with new potatoes. What's on your plate tonight? Recipe at @djalali_cooks #hyggefood #mediterraneanflavours