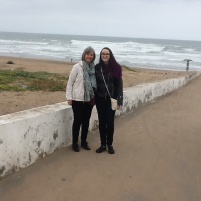 Day 4 – I am writing as we fly over Mediterranean headed north east to Barcelona. The airplane lunch was eggplant and meat gratiné. I ate the eggplant but skipped the meat part. All I really wanted was a cup of tea anyway. We had just had lunch in the cafeteria of the airport. Ariane had a passable roast chicken leg, I was served a salad of tomatoes and goat cheese. The quantity of cheese was about 1/2 lb. I am not a big cheese eater most of the time, and I certainly couldn’t eat that much cheese in one sitting! I shared with Ariane and ate the bread and tomatoes.

We started our day with breakfast at the hotel Les Saisons, Casablanca. The taxi driver we had used from the train station yesterday was meeting us for a tour of some of the main sights. Mustafah drove us to see Notre Dame de Lourdes cathedral, a modern structure in the French district. We then drove along the port area to the magnificent Hassan II mosque. Words don’t even begin to describe this incredible structure, built along a sea wall, capable of holding 25000 people inside and about 100000 people on the outside, if needed. The inside is decorated in marble, mosaic and decorated cedar. Stucco is carved at the top of pillars, the doors are titanium and can be opened hydraulically. The chandeliers are all made of Murano glass and can be lowered for cleaning by remote control. Even the very ornamental ceiling is retractible, something that must be amazing on a sunny day! There is a fully operational hammam in the lower level and even a Turkish bath. The minaret stands at 100 meters above sea level and 30 feet below the ocean. It is the highest such structure in the world.

We continued our drive along the oceanfront, La Corniche, as it is called. It leads to a ritzy neighbourhood that could be American or Saudi, filled with fast food restaurants like the Big M and KFC. There is also a surf school that seems to be sponsored by Quicksilver. The waves a huge here! I think Leon would like it very much.

Our visit was soon over and we headed to the commuter train station to get to the airport for our flight to Spain. When we finally boarded our plane, neither of us took long to fall asleep and catch the much needed rest we missed out on last night. I guess we were too excited by the many fantastic sights of Morocco and anxious to get on to our next adventure in Europe.

Don’t worry though, the trip does’t stop abruptly there. We have a return stay in Casa before we fly to Montreal on Sunday. In the meantime, we are entering a new continent, will use a new language and will move our watches ahead yet another hour.

2 thoughts on “Out of Africa”