Well summer is definitely here!  Our bird feeder is not only busy with the adult birds, now they are bringing junior around for a feeding.  Leon has been filling the bird feeder about every second day.  It’s been a busy spring around the feeder since the grackles arrived.

When we spotted the first grackle, we thought it was a new bird type come to visit.  This one was spotted.  It came by a few times and then brought along its whole family!  Pretty soon the pretty birds like the cardinals and the chickadees were being crowded out.  Concerned that the smaller birds and my favourite cardinals would stop feeding here, Leon bought a grackle-proof bird feeder.  It’s been a source of many amusing sights.

First the grackles would try to get to the feed, poking their heads through the outer cage, but not quite being able to reach. They would try and try, but no success.  In the meantime, the little birds started to visit and found their way into the cage, feeding freely.  We now had some new visitors, notably the house finch, with its red head and the bright yellow golden finch or wild canary.  One day, Leon was sitting in the den when he heard a tap at the window.  It was a greenish small bird that seemed to be trying to find its way in.  We later discovered that it was a female golden finch.

Another day, there was a chipmunk who found a way to get into the feeder cage, thanks to the lovely lattice Leon installed for my new honeysuckle plant.  He sat there and gorged himself, cheeks filled, until Leon chased him away.

On Sunday, we were watching a black squirrel try to break into the feeder.  He hung upside down for a long time, then tried to bite off the lid gasket. All the while, Leon was giving commentary, saying what might be going through the squirrel’s mind.  Hilarious!  After a while, the squirrel would go onto the shed roof to contemplate his next move and then try again, seemingly forgetting instantly what he had planned to do next. 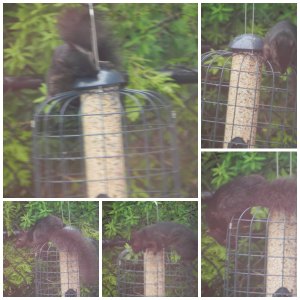 Eventually, Mr. Squirrel left and came back with a buddy, Grey Squirrel.  They hopped onto the shed roof and seemed to be getting ready to attack the feeder.  But now, Mr. Squirrel had something very different on his mind.  It turns out his buddy was a young Miss.  Well, taking their cue from the birds and bees, they got down to a little something, something.  Just for a few seconds, and then Miss Squirrel was off in another direction, leaving Mr. Squirrel behind.  Perhaps he was calling “Wait!  I didn’t even get your name!!”