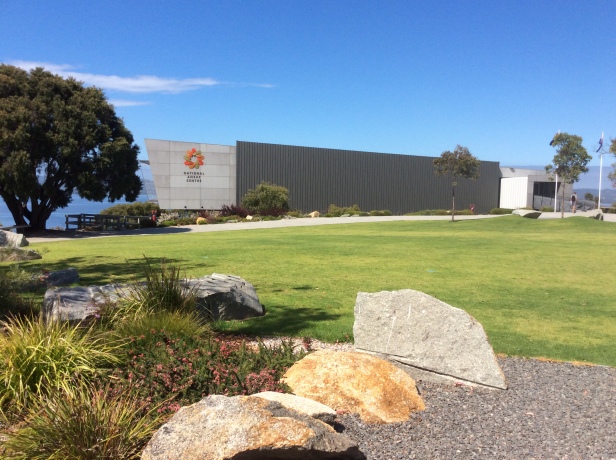 From Augusta, we drove east towards Albany, where the National Anzac Centre is located. It was our first rainy day, driving through forests. I wished the road would follow the coast more so we could see the ocean, but the trade off would have been a much longer trip and we already had a tight itinerary.

One stop along the road was the town of Denmark. I mean with a Danish born husband, how could we not stop?

We turned into the large info centre to enquire about the town’s origins. Disappointed, we found out the ship that had arrived to settled this area had a Doctor Denmark on it. That’s it! I have to say the lady at the info center was less than cordial as she tried to imitate a Danish accent saying so many Danes showed up looking for a lost link to their culture. We were not inclined to visit the town after that. I was glad I had booked a hotel in Albany rather than stay in this place.

Albany is a port town with major logistical advantages. It was often the first or last stop for goods moving to and from Australia. But it is remembered with reverence and sadness as the “last look our Anzac troops would have had of their homeland”. During the Great War, 2 large convoys were sent to provide strength to the Allied Forces fighting in places like Palestine, Ypres, the Somme, Passchendaele and most notably, Gallipoli on the Turkish Coast. Ironically, part of the convoy that was arriving from New Zealand was accompanied by their then Allies, the Japanese. (In WW2, Anzacs suffered horribly at the hands of the Japanese Army, including bombing in Darwin.)

We arrived too late in the day to visit the National Anzac Center. Instead, we took a walk around the grounds that were once the base camp for all the operations. The area sits high above a large harbour providing amazing views in all directions. We returned to that area the second day and found the Battery Observation Post where I was able to get a real sense of the views.

On day 2 of our visit, we first walked around and looked at the gun emplacements for coastal artillery. Much of the original equipment can be viewed or imagined, although Leon told me the grounds would have been trimmed of the natural growth during wartime.

During the weeks leading up to the deployment of the convoys, the troops would have lived on board the ships, only coming to town occasionally for exercise. You can imagine the Anzacs proudly marching down the main streets. What a sight that would have been, young men in uniform, impatient to serve their country and win the war. I pictured some who would have never seen the ocean until they boarded their ships. Would they have thought Albany an Oceanside paradise or just been impatient to get on with it?

We visited the Anzac Center, spending a few hours learning in depth information about the Great War and the Anzac’s role in it. The losses were terrible! What I became interested in reading were the stories of the survivors, how it took the government so long to bring them back to Australia after the war and how some were given so little in return for their service. So many returned with injuries both physical and psychological, unable to resume their lives as they had dreamed.

After a while, I couldn’t stand the emotional impact of the many stories the Center revealed. We left this beautiful place with me feeling the helplessness and sadness that must have touched so many of those left to guard the homeland during those terrible years.

One thought on “Albany”