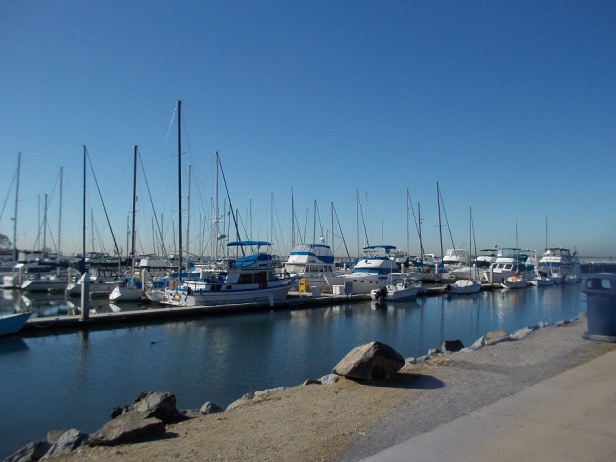 Our last morning in San Diego was sunny and warm as were the previous days.  We packed up Roadie quickly and went for a walk at the marina. It was lovely there with the boats and a good view of San Diego Bay.  We could see the opposite side of where we had camped on previous days, at the State Park. We had time for a swim and some poolside before check out time, so we spent each precious moment there.  It was time for showers and check out in no time.  We walked over to the showers but I was too lazy to wear my sandals.  I managed to slip on the decking and went down with one leg twisting behind me.  After some assistance getting up again, I showered and we were on our way east into the desert. 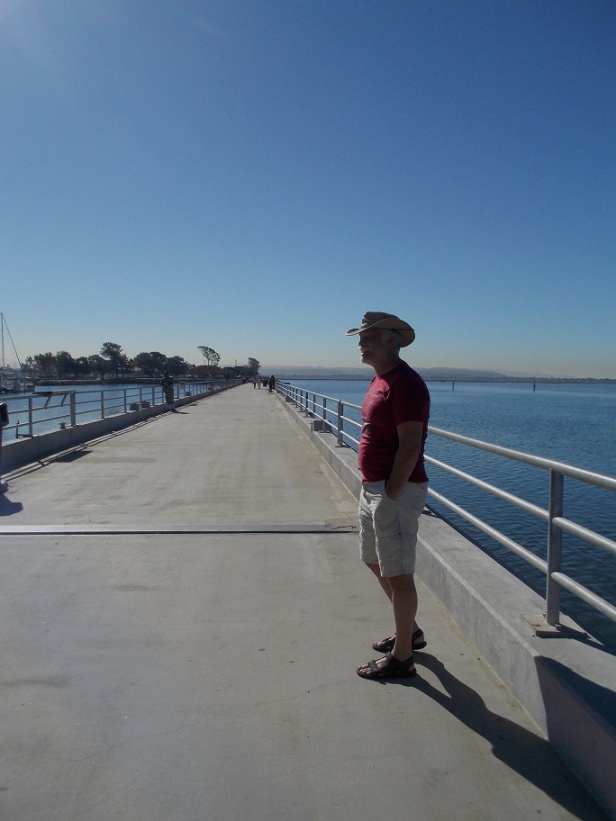 The terrain changes rapidly as you drive up into the hills.  The mountains are made of all size boulders that look like someone decided to place them there.  I imagine glaciers moved all those rocks at one time.  We stopped at the Desert Tower for a quick lunch and to visit this unusual site.  We had seen it going west the previous week. There is also a guy who seems to collect flying saucers in the area, so we were curious.  When I got out of the camper, my left leg was starting to stiffen up and it was hard to put weight on it.  Leon paid for a visit for 2 to this tower and some rock caves, but we didn’t walk more than 100 feet before I decided to stop and turn back.  Too bad. There is a whole story behind the rock carvings. You can see a small sampling I photographed. 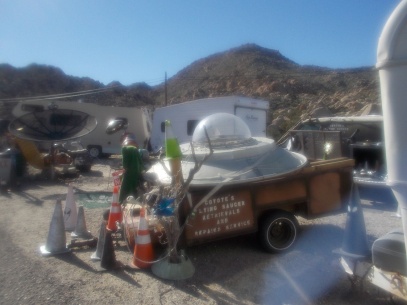 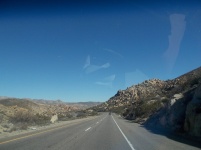 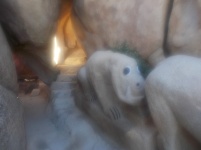 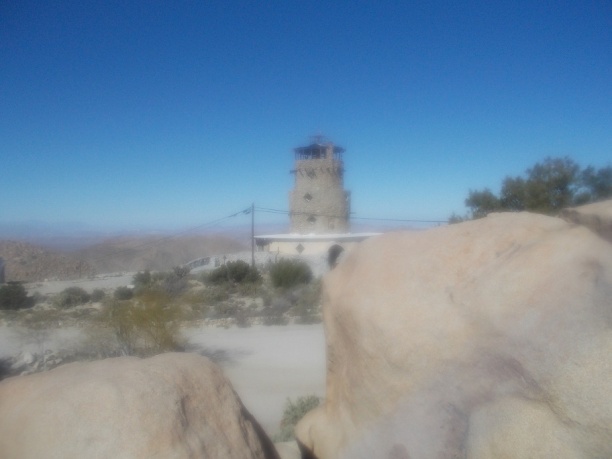 Along the way, we saw these great sand dunes where dune buggies were driving up and down.  These are the Glamis Dunes in CA.  It was worth stopping for a picture.  Many RVs were parked for the weekend in great villages in the middle of the dunes.  Very cool!

We kept driving till we got to Yuma, AZ.  I had heard many Canadians stay there over the winter months.  I looked up an RV resort to stay at.  We hadn’t gotten to the entrance when we decided it was a bit too derelict to drive in.  So we drove on and went to a McDonald’s to find more suggestions.  By then it was getting a bit late as we forgot we had driving into a new time zone.  We found another RV resort which seemed old but quiet.  The camp host was very nice and suggested we might stay at the neighbouring campground which offered overflow parking for $20 per night.  We took her up on that!

Once settled, we went for a long swim in the warm pool as we chatted with some delightful people from Saskatchewan.  It seems there are a great number of people from that province who stay in Yuma.  They warned us about the train coming by frequently and suggested another campground we might like for the next night.

After soaking in the pool and hot tub for at least an hour, we went back to Roadie so I could make our wedding anniversary dinner – garlic shrimp, rice and a bottle of bubbly to share.  Dinner was delicious!  The shrimp were huge and we had plenty to share.  Of course, how I could complain about bubbles from Chandon?  After dinner, we sat outside and looked up at the stars.  Our campsite was not luxurious but we were happy nonetheless. 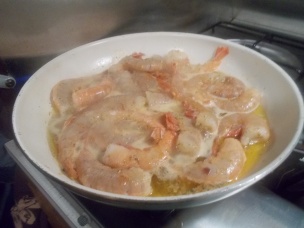 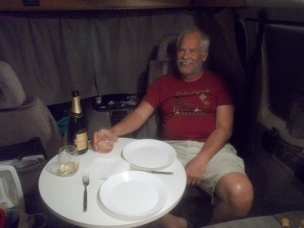 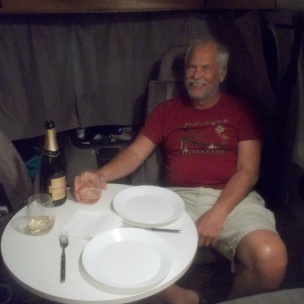 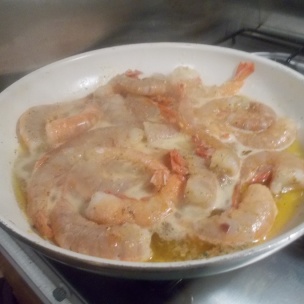 That night, I fell asleep promptly and was rudely awakened by trucks working on constructions of some sort.  I could hear the beep beep of them backing up, then what sounded like cement trucks and then the honking of horns to tell the other operator to move on.  Great!  Added to my huge headache (thank you Chandon), it was not making for a good night.  After closing as many windows as I could, I finally went back to sleep.  In the morning we were awakened by the trains, many of them, blowing their whistle as they passed.  So although the campsite had a great pool and lots of palms, although the managers and guests were very friendly, we knew we would move on that morning.

Leon was kind enough to walk me to the washrooms as my leg was really buckling at this point.  There was a yard sale on and things were bustling by 9am.  We packed up again and went on a search for a better spot.

After shopping at Walmart, we sat in the McDonald’s and used the internet for our search.  I found a place that seemed perfect, well away from trains and highways.  We drove there with a few hiccups from our Manic Maggie.  She was telling us to turn on unnamed streets that didn’t exist.  We got to visit the campus of the Arizona College as a bonus!  When we finally found the resort we were looking for, it turned out to be a private members only place, sort of like a time share.  This was not what we wanted for one night, nor could they accommodate our request.  We drove on.

The next best suggestion was to find a place some friends were staying at.  It was a bit more posh with golf course and tennis courts and a nice pool.  We finally found the office, after 2 times around the whole complex only to be told they only took campers 22 ft in length or more.  We were directed to the neighbouring resort where we would a lovely shaded spot with a super nice neighbour who let us use his personal wifi connection.  It seems that wifi is not very common in these RV parks.  Probably because they are older.  We spent a glorious afternoon in the Arizona sun poolside, grilled chicken for this week’s meals and a steak for our dinner.  Not a bad day at all!