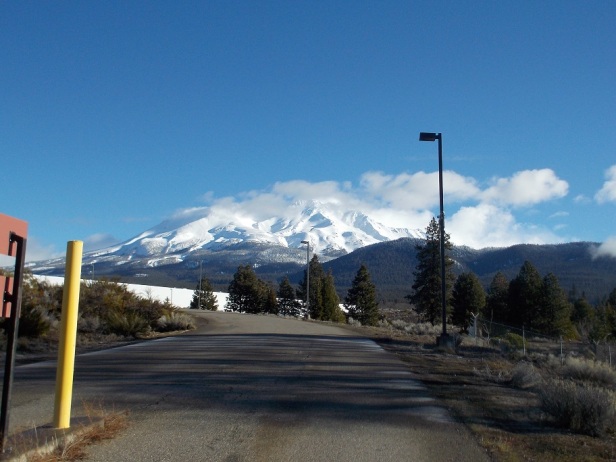 We left Langley on Thursday morning.  Of course, we forgot some things, like the laundry bag or the kettle to put on the gas stove. We drove through Seattle (which I have yet to visit) and onto Oregon (which I need to visit more) along Interstate #5. It’s not always scenic but it gets you where you’re going.  And we wanted to go south to California.

The weather was incredibly warm for a person from Ontario.  I wore a long sleeved t-shirt with a fleece vest all day.  Our first night, we stopped in Castle Rock, WA. We had hoped to drive into Oregon, but is was getting dark and we left BC late.  We pulled into a KOA campground, set up (plug the electricity in, pour a glass of wine, plan dinner) and we were done for the night.  It got a bit cool as the evening went on, but with comfy sweatpants and socks, I was toasty all night and slept well.  I remember lying in bed thinking how comfortable I was.  I just wanted to be in the moment.

We drove further south the next morning and made it to Mt. Shasta, CA.  It rained much of the day and I crocheted while Leon drove. At one point I spotted snow on the side of the road and then a whole lot more snow as we entered the higher point after Grant’s Pass.  It actually snowed as we were coming down the big hill and entering California.  We even spotted the De-Icer truck!  I have to say I never thought of California as a snowy area.  Yes, I’ve heard of it, but I though they just didn’t know how to handle snow.

At the bottom of this long mountainous area, we stopped at Mt. Shasta.  It’s one of the larger peaks, like Mt. Rainier and Mt. Baker (which we can see from Langley), all snow covered and averaging 14000 ft in altitude.  Divide that by 3 if you are metric and it’s still really high!  When we arrived in Mt. Shasta, it was dark and cloudy, so we couldn’t see it at all. We made ourselves comfortable at the KOA.  I had visions of a hot shower but the shower room was not really heated.  I settled on a nice pork chop dinner, a cheap red Gallo wine and another cozy night in the Roadie.  It got really cold overnight.  Good thing Leon reminded me to close the roof hatch before I fell asleep.  My arthritis wasn’t too happy about the cold but my mind was just so at peace. 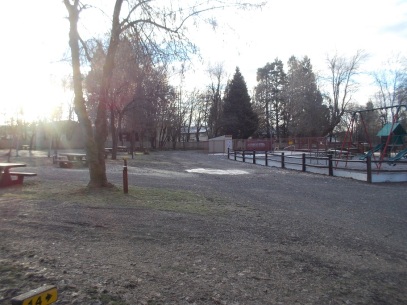 The pool at Mt. Shasta, clearly not open for the season. 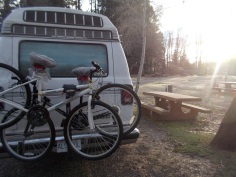 Roadie on a frosty morning

The sign says caution Rattesnakes. They are about in the summer during the night or hiding under rocks to keep cool. 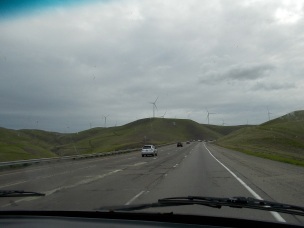 the terrain across the mountains to the beach

We woke up this morning to a frosty and bright day.  The sun didn’t come over the hills until 8am when I went to the bathroom area. What a glorious morning it was!  I had hopes of seeing Mt. Shasta in all its glory.  I wasn’t disappointed.  It had been very cold the night before.  So much so that the water hose we just installed was full of ice.  Leon had to wrap it and let it thaw in the camper before emptying it and storing it.

The rest of the day was spent driving further south.  The terrain got quite different as we moved into the foothills of the Cascade mountains.  There was a definite Cowboy/Mexican feel to it.  We went from snow capped mountains, to green hills, to something that reminded me of the canyon on the way to Prince George.

We made our way to the coast as best we could and settled here in Santa Cruz for the night.  Tomorrow, we hope to tour the area, see the beach, perhaps watch some surfers and make our way further south towards San Diego.