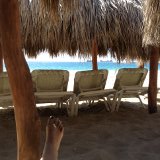 On the day we arrived here, Leon and I headed for the pool and swim up bar while searching for my daughter who had arrived 2 hours earlier. The swim up bar was closed, so we swam back to our chair to dry of and walk up to the lobby bar. I didn’t take the time to put on my sandals and the first thing I did was catch my little toe on the chair. Since my feet are mostly numb, I didn’t think much of it. But later on, when I put my sandals back on, I felt sharp pain coming up my foot. With all the discolouration, I’d say I may have a small fracture there. Good start!

That didn’t deter me from enjoying the beach and surf, but the tour guide did. He told us the surf here is quite rough, so to never turn our back on the waves. When I finally got brave enough to really play in the waves, I took not one but 2 good tumbles worthy of a 9.5 in the gymnastics competition. Leon said he would have given me full points but I have to work on my landing. I lost my sunglasses and  never did see them again. Perhaps some whale will be seen wearing them further up the coast.

I was wearing my one piece chlorine resistant bathing suit, suitable for my Aquafit classes. It never gave any warning about not swimming in the ocean. When I removed my suit to use the toilet in the lobby, a ton of sand fell out and made a mess of the newly swept floors. Later on, I took care to remove it in the shower so as not to dirty the room. I rinsed it off very thoroughly and hung it to dry. Yesterday, I wore it again to go to the pool and ended up swimming there for hours. As soon as I removed my suit in the room, Leon alerted me to more sand. So off it came in the shower, rinsed over and over and soaked in the sink 3 times. I’ll have to check it again later as I don’t want the sand ruining my laundry machines. 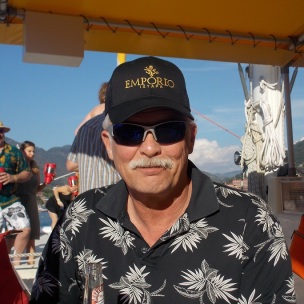 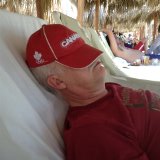 Leon was not immune to the crashing waves either.  His theory was that if you go out far enough, you get behind the larger waves and are fine.  The ocean disproved that a few days later while I was on a long walk by myself.  Leon said he had 2 tumbles as well, once loosing his hat and sunglasses, then recovering them.  The second time, his hat was lost for good.  So be on the look out for a whale with a 2006 Olympic hat.  Also note I have included a picture of Leon’s new hat.  We managed to make it back to Canada with no further losses and our new sunglasses still intact.

We actually did try to stay active. Yesterday we decided to rent bikes to make our way to the local marina. I figured riding would be easier than walking with a sore toe. Leon took some lovely photos and we laughed at the sign that warned us about no swimming due to “cocodriles”. It’s a hybrid word, I guess. We pedaled around for a while but it was very hot! In no time, my face was red and I was craving shade and a cool drink. So we rode back to the commercial area and stopped at a restaurant run by a Canadian who we had met the previous night. My lemonade was freshly made and very delicious. While sitting there, I checked my pockets for my lipgloss and room key. Of course, they had fallen out. We tried backtracking all the way to the marina, but it was useless. Fifty pesos later, I had a new key with a new code on it. Sheesh!

Leon also decided to rent a bicycle another day and explored the cycling path and ecological area on the way to Playa Linda.  He rode roughly 20 km that day before tumbling in the ocean surf.  I’d say that was a pretty active day. 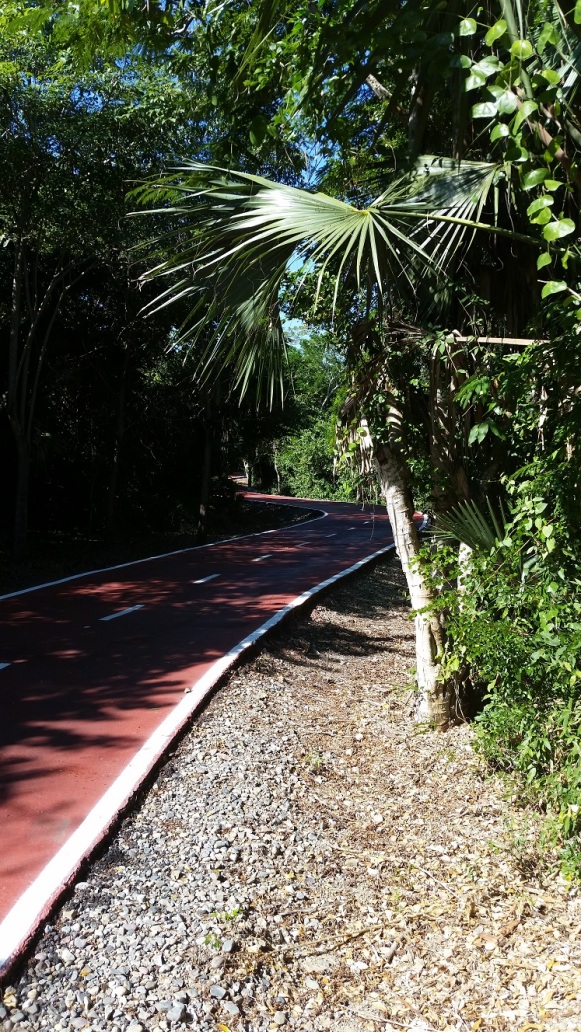 3 thoughts on “A very active vacation, sort of”