On the second day, we drove from one end of the island to the other.  It was still raining and cool.  I discovered that my arthritic joints don’t particularly like this kind of weather.  I dragged my achy bones to Tow Hill Road to see the blow hole.  It’s actually a very nice walk with magical scenery (ok David Suzuki, you are right).  There is some interesting geology involved in the area, namely that the rocks tell a tale of this part of the island having actually been pushed there by the glacier, so although it is attached to Graham Island, it’s not made of the same stuff (can you tell I am not a science teacher?).  Had it been a clear day, we could have seen the islands of Alaska, but alas, the rain continued to follow us.  The Haida have their own version of this geological formation, stating their legend about a raven and a whale that were turned into stone by an angry mythological character (oh dear, I do apologize for my liberal interpretation of these very important sacred stories).

We continued along the coast to Agate beach, which is on the Pacific side as well.  We could have camped there but people told us the winds were very strong and most people grown tired of them.  True, but Roadie would have kept us safe and dry anyway.  I know nothing about agates, so I asked the local teenagers if they could help me locate a few on the beach.  They were most helpful explaining there are various levels of cloudiness to the agates.  Once I was able to identify them, I saw an agate every 20 rocks or so.  I could see how this beach would have been lovely to walk on and beachcomb, but the rain was not letting up and we had decided to take the overnight ferry back to Prince Rupert by then.  So we moved on with 3 agates in my pockets.

We drove to Port Clemens, home of the Golden Spruce, which was celebrating its 100th birthday this year. Before we stopped there, we found a great bakery called Over the Naikoon, where we purchased a loaf of bread still hot from the oven, a delicious cinnamon bun and a cup of tea (coffee for Leon).  We also drove past Tlell, when the annual Edge of the World Music Festival was on.  It was mostly a tent village and they looked rather soggy.  I was hoping to get a t-shirt from the festival, but I wasn’t willing to pay admission just to buy a t-shirt.  Moving on…

As we drove south, we hugged the eastern coastline which is rocky and scenic.  The wind was blowing from the south east, so the waves were quite nice.  I was secretly hoping the wind would die down before we sailed at 10pm though, which it did.  We stopped to visit Balance Rock and another great coffee shop|post office for another coffee for Leon.

We made sure to visit the Haida Cultural Centre in Skidegate.  It is an impressive group of longhouses marked by several totems.  We toured for 2 hours and enjoyed reading all about their history, as well as seeing some of their current art.  I especially liked the textile arts, such as the ceremonial blankets.  I was hoping to find a really great souvenir in the gift shop but found the ferry gift shop was probably better stocked.  Leon bought a pin for our collection anyway.  It’s a really nice pin.

We moved past Skidegate to visit Queen Charlotte City, the administrative center of the islands.  I was expecting some charming boutiques and cafés but there was very little there except the hotels where the tour bus stays, along with the one seafood restaurant which was all booked for the evening.  We resorted to plan B, which is really always plan A, and found a nice place for me to warm up some leftover fish for dinner.  Chez Roadie always seems to be our favourite restaurant.

We got in line at the ferry terminal and got ready to spend the night sleeping on the floor in the main sitting area.  We had experienced this on our ferry ride back from Newfoundland, and knew it would not be comfortable, but we were willing to make the best of it.

We boarded the ferry promptly and I scouted out a suitable site for our nest.  While we sat and waited for the ferry to leave, Leon had the brilliant idea of having me check for a cabin cancellation.  It turned out there were plenty of cabins available.  For an extra $90, we had a room for 4, including a pretty terrific hot shower.  Ok, the room was noisy.  It sounded like we were directly over the engines, but we found a way to pass the time and eventually got at least 4 hours of sound sleep.  After a great hot shower, we were ready for our next adventure – Alaska!! 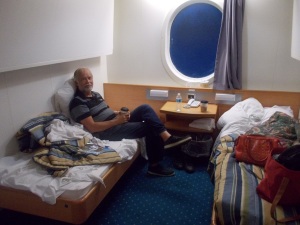 One thought on “Magical Haida Gwaii”