We travelled from Ste Anne des Monts to Forillon Park along the river.  It’s a gorgeous drive that hugs the coast with high hills or mountains.  We are at the end of the Appalachians here.  We stopped in Grande Vallée, where a former neighbour of mine is from.  Of course, we had to stop at the poisonnerie for a huge lobster for dinner.  For $17, plus $1 for cracking it, we got a 2 lb lobster, suitable for a shore dinner at the park.  We also stopped for lunch and ate some home made egg sandwiches at the city beach.  Lovely little town.

Our campground at Forillon was in the Desrosiers section.  We had a slight view of the water from our picnic table area but it was a short enough walk to the beach, which reminded me of St. Tropez with the flat large pebbles.  We made camp and had a nap, then after a great dinner, we were off on our bikes along the trail that follows the beach back to the lighthouse area.  We were pretty sure we saw a seal but I couldn’t get a good picture of him, even with the focus lens.

After the bike ride, I was still restless, so we took a short walk along the beach and Leon skipped some stones in the water which was getting quite smooth at low tide.

In the morning, we visited some of the other parts of the park which recount the days of cod fishing.  Gaspé was an important cod exporting port from 1865 to 1940.  The tiny community on the edge of the peninsula, which is now part of Forillon Park, was known for its salt cod which was of a high quality and could last for several years without fear of spoiling.  European markets would get the very best quality cod, whereas the second grade cod was shipped to the West Indies and Brazil. By the way, we did notice that back in the late 1800s, they had trouble finding a school teacher for the area.  Leon suggested there might be the possibility of a teaching exchange for me? 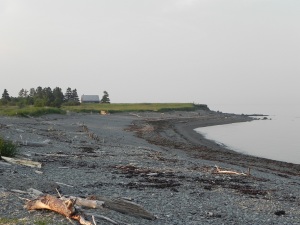 Today’s drive took us to Percé where the big rock with the hole is.  For my Aussie friends, this is as close to the 12 Apostles as we get.  The area is also known for its large colony of Northern Gannets, really cool birds that dive from several meters high to fish mackerel (Reading up on them, it seems their cousins live in Tasmania, and I never knew!).  Our campground here is across from the sea.  We had a nice walk, a beer at the seaside bar and free concert at a local bar by a country singer.  Leon says: Johnny Cash est au Québec!  By the way, the last picture on the bottom right is of the little penguins or razorbills.  Unlike the penguins we normally think about, they can fly, but they are related to the penguins of the Antarctic. 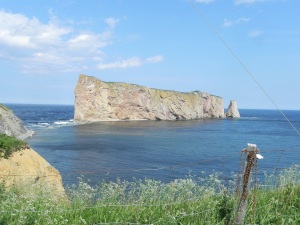