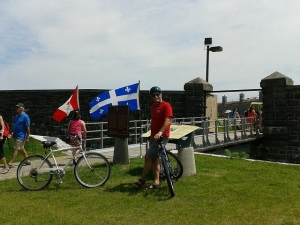 Day 2 – We got off Hwy 20 once we neared Quebec City and got on to Hwy 132, the road that hugs the shores of the Fleuve St-Laurent.  On the way, we stopped at the Forts of Levis National Historic site to visit the old fortifications that were built over 7 yrs after 1865.  The British had approved an expenditure of $1M for the purpose of building 3 forts that would protect their territory in the event of an American invasion, following their civil war.  Those pesky Americans, you’d think they would leave us alone after the War of 1812! Well to be fair, the American President did tell the British they were safe as he was busy tending to some troublesome Irish in New York.  But the British had worries of their own and Quebec was poised to be a major trade center if things got much worse in the Baltics. 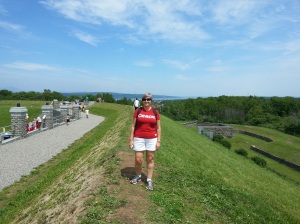 Eventually they built Fort 1, which we visited, but Forts 2 and 3 no longer exist. And as predicted by the Americans, the forts were never used.  But on July 1, the fort was alive with new immigrants coming to do the swearing in ceremony that would be broadcast nationally later that day.  I was pretty emotional watching the group get their citizenship cards and knowing they would soon be able to exchange those for Canadian passports.

From Levis, we drove east with a stop on the waterfront for lunch.  I picked a few wild strawberries to taste.  It reminded me of my childhood when I would spend hours in the orchard near my house, just daydreaming and picking flowers or fruit. 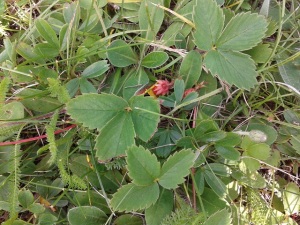 The next stop was Montmagny, an old town with a very nice church at its center.  The town was established in the 1640s with the original church being built shortly thereafter.  Unfortunately, it was built too close to the river, so it was almost washed away with the tide.  I read that the town was threatened with excommunication if they didn’t build another church in a better location as their cemetery has already disappeared into the river.  So they built a large neo-gothic style church in town, which was unfortunately burnt down. They rebuilt and added to the church over the years and another fire destroyed it. The current church was finished in 1953.  We discovered other churches with similar fates as we traveled this route.  Wooden churches just didn’t do very well. 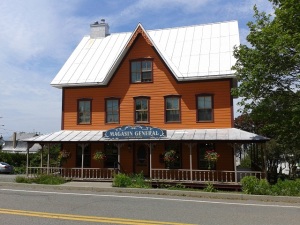 Montmagny was alive with a family festival on Canada Day.  Unfortunately, people in Quebec don’t seem to want to acknowledge our national holiday, so they find other ways of celebrating on this day.  There weren’t many Canadian symbols, but there were the usual balloons, children’s activities and fireworks planned for the evening.  I proudly wore my red Canada t-shirt and was complimented on it at one point.

We picked up a basket of fresh local strawberries and munched our way to St.Jean Port Joli, our final destination for the day.  We found a nice waterfront campground and parked for the night.  After an aperitif of wine, we rode our bikes over to the Canadian restaurant, a few hundred yards away.  Dinner was a cipâte for Leon (a meat pie made with 4 types of meat) while my dinner was a bouilli (vegetables boiled with salt pork, served with pot roast style beef).  I make bouilli each year at the end of summer, just as my mother did.  I found the food at the restaurant was quite authentic.  We took our date square to go and rode back to the campground.  After a short bike ride to see the waterfront, we retired for the night.