We woke up really late on Saturday morning – 9:45am!!  Sleep is so solid in the camper.  Maybe it’s the fresh air, maybe the quiet of the woods?  I didn’t look at my watch when I stirred in the night, figuring the noise of the neighbouring campers would  wake us, but it didn’t, obviously.  We awoke to a gorgeous sunny day!

Today’s plan was to drive to Victoriaville and find the area where my father was born.  Leon was kind enough to trace my father’s addresses through his military records.  Dad was born in Arthabaska in 1917. The town merged with Victoriaville later on, so that was our starting point.  Victoriaville was established as an industrial centre with much of the town built around the railroad.  As we drove in, we saw a beautiful church as is never unusual in Quebec.  After all, Quebecois were predominantly Roman Catholic for many centuries.  The churches usually have high steeples which are visible from miles around.  In “ancient” times, the church bells would ring in case of trouble and people could see the direction to head in for safety thanks to the high steeples, which were often covered in a glittering “silver” roof.

Around the corner, closer to the old train station, we found a fine example of Victorian architecture in the old train station Bar (Le Bar de la Gare).  In front of it, a mural had been painted depicting the history of the town and its merge with the towns of Arthabaska and Ste. Victoire d’Arthabaska.  On it, we found the depiction of several famous local people, among which were Jean Beliveau (Montreal Canadians Hockey great) and Sir Wilfrid Laurier (Canada’s 7th Prime Minister – 1896-1911).  At the top left corner was the name of Achilles Gagnon – surely one of my dad’s relatives.  As the weekend went on, I found so many interesting “Gagnon” artifacts that I will place them all on a separate page so they become more cohesive.  You can watch for that later.

We left Victoriaville and drove towards Quebec City via route 132, la Route des Navigateurs, which follows the St. Lawrence River.  Starting at Lotbinière, we stopped to look at yet another grand church, St. Louis de Lotbinière.  I asked the custodian for information and was told it was built mostly of wood.  The details of the front columns were quite impressive.  Beside the church was the manse and another larger building that I was told used to be a nun’s convent. It is now converted into modest income apartments.  With a view of the River, I wouldn’t mind having a property like that!  The custodian told me a bit more about Drummondville and asked if we had seen the street with all the Victorian houses and Laurier’s birthplace.  It seems we missed that whole area, which was actually Arthabaska, including a great view from the surrounding Appalachian hills.  We will try to get there next time we drive East. 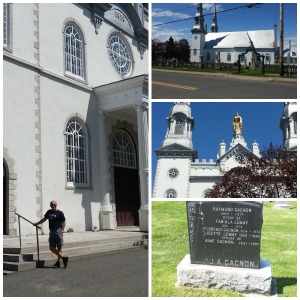 At any rate, we continued our drive, having obtained the location of a good bakery (boulangerie).  We purchased 2 fine loaves of bread, some salted caramel spread (award-winning, I was told) and some blueberry jelly from a local producer.  Lunch was eaten by the River near St. Antoine de Tilly – sandwiches made from olive-herb bread, tomatoes and left over chicken from the previous night’s dinner.  Back in the camper and into to Quebec we drove.

Quebec is on the north shore of the St. Lawrence, so we drove over the bridge, past the old town and headed past the Montmorency Falls to our destination of Chateau-Richer.  We found our campsite for the night, conveniently located on the banks of the river, right beside the Ste. Anne Highway (Hwy 138).  It was underwhelming to say the least.  I am not sure why people would want to leave their home to live in a trailer with a few plants and lights used to separate them from their neighbours, not a tree to be found, and not much to do except swim in the large pool which affords a great view of the highway.  But hey, ours is not to question, right?  For our purposes, we were only spending the night, so we didn’t even take a lawn chair out or pull open the canopy.  We just got back in the camper and set off to find my ancestors or their properties, as they have been dead for over 350 yrs! 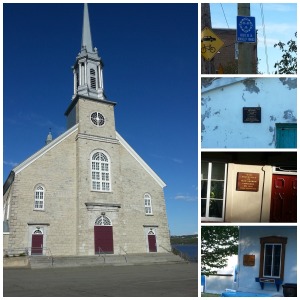 We drove along the Route de la Nouvelle-France, Avenue Royale, where I had read I could find evidence of where my original ancestor settled in the 1640s.  We stopped at the Geneology office but it was closed due to the late hour.  Across the street, there was yet another lovely church with a graveyard, where we searched for some Gagnon grave stones.  We were not as fortunate here, so we drove on.  Leon had also read that there was a plaque erected somewhere along this road to commemorate the early settlers, so we continued East.  As we drove, we stopped to take pictures to the plaques on old root cellars.  Stopping frequently (pity the poor drivers trying to get around us on this narrow road), we snapped several pictures of the plaques on cellars and homes showing these were the lands of the 3 original Gagnon settlers, Jean, Mathurin and Pierre.  Bingo!!

We also found a lovely country inn, l’Auberge Baker, where we eventually returned for dinner.  I’ll write about dinner in a separate post as it merits your full attention.

It was still light enough for us to search for more of my roots, so we continued east on Avenue Royale to the beautiful Shrine of Ste. Anne de Beaupré.  The ancestors would have built a chapel there, but all that remains is the existing Basilica and what is labelled the 3rd chapel erected in the 1800’s. According to some of my research, the 3rd chapel sits next to the original chapel’s site.

There was a bit more daylight left, so we headed back west to see the Montmorency Falls where Leon took a spectacular panoramic picture. The falls are actually high than Niagara Falls, although much narrower.  The view from the walkways shows Ile d’Orleans and the St.Lawrence River.

Blissfully Blueberry tea on ice with a splash of blueberry balsamic vinegar, fresh blueberries and a twist of lemon. Refreshing on a hot day. @myteabox.ca #summerflavours #sunday