From Vimy, we went northwest towards St. Aubin sur Mer, one of the landing beaches of the Canadian Forces during WWII and the nearby Juno Beach Center. The Center was the idea of Garth Webb, a Juno Beach veteran himself, who wanted a place for visitors to hear the stories of those who landed during D-Day, June 6, 1944. This was the biggest Allied invasion ever organized and is credited with determining the outcome of the war.

Many, many men died on the beaches that day. Garth Webb wanted people to experience the stories of the men, so young, who had come ashore. The Center has purposefully chosen interpreters who are under 25 so that people can realize just how young the men who fought at Juno Beach were. (Coincidently, I met one of those ladies at my daughter’s bridal shower a few weeks ago.)

It was a very emotional tour, ending with a 12 minute film that left me shaken for quite a while after it ended.

Before we left the Juno Beach Center, we checked on one name, Private John Carwonn Coburn, the same gentleman we had visited at the gravesite in Calais. The Center has commemorative “bricks” which are displayed outside. Our soldier was among the names on the bricks, where the names of those who died on D-Day face the ocean and the beach. 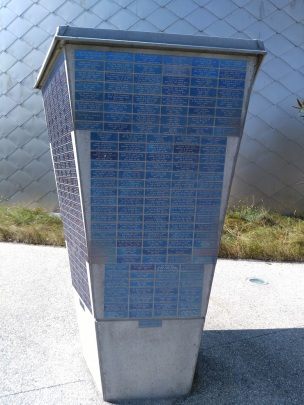 This was a happy discovery for me to report to my sister in law who had asked me to visit John Coburn’s gravesite. It turned out he was her father’s younger brother who had followed him into war but never returned. She said her father never got over it. 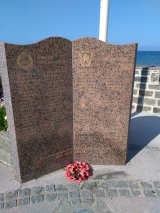 The town of St. Aubin has a plaza on the beach with features Canadian and French flags as well as commemorative plates. As you look down the beach today, you can imagine what a lovely seaside resort it would have been before WW2 when the German army occupied the area and locals were not able to enjoy the shores of their own country. 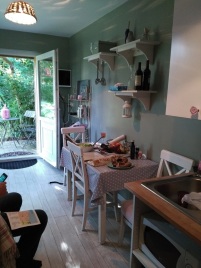 We rented the most adorable “maisonette” just 2 blocks from the beach. It was located behind a large house and featured a lovely courtyard. The decor inside was just so perfect! The first night, I made us a huge salad and Leon enjoyed a baguette to go with it. Of course, there was wine. The wine is all delicious in France.