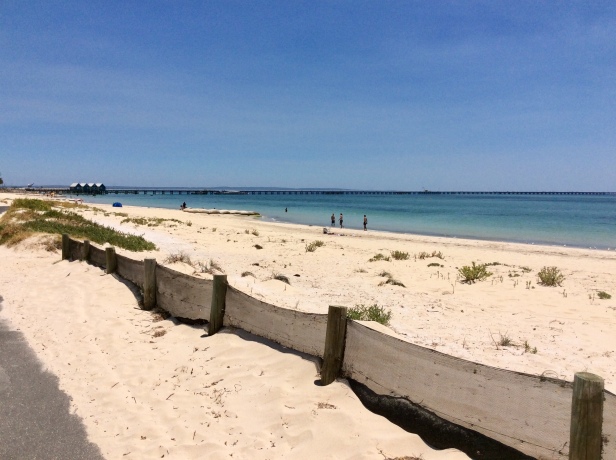 We flew to Perth from Melbourne. The flight was uneventful. Picked up our car at the airport then drove into town to our hotel. We were in the Asian area. We found a nice Vietnamese restaurant within a block and enjoyed a good meal.

After a good sleep, we found a bike shop/cafe for breakfast. We were told bike shops are very common in Perth where cyclist like to stop for a meal and a coffee while riding in the city. I noticed they even had showers available. 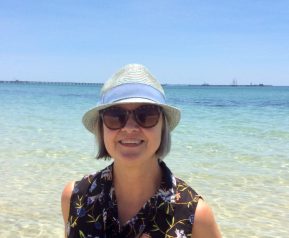 We drove to Margaret River, about 3 hours south. On the way, we stopped in Busselton along the beach for a cup of tea. Of course I had to put my feet in the Indian Ocean to see how warm it was. It was glorious! The water was clear and so turquoise. Unfortunately, we only had time for a quick stop as we were meeting Janice and Bill in Margaret River.

Busselton once was a thriving port with a very long pier. It’s former administrative buildings and lots have been converted into a museum and arts centre. We stopped by for a quick visit and a cup of tea. Unfor, it looks like we both got in trouble. We’ll have to pay for that somewhere down the line. 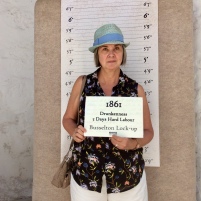 Bill took us on a drive through a lovely forest on our way to Hamelin Bay to see the rays. Understand that the forest is made of gum trees, so they are more spread apart than our Canadian evergreen forests where you can barely see the sky. As he drove, he explained what the Nullabor meant. That’s the large barren area from Adelaide to L’Esperance on the southern part of Australia. You can drive through it but the roads are very straight and there isn’t much to see except desert on one side and ocean on the other. Anyway, he explained that the word meant no trees. I knew that! I just had to remember my Latin. 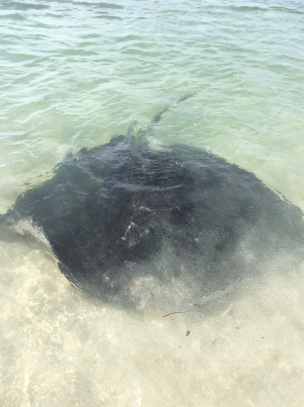 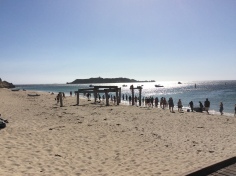 At the end of the forest, we parked and made our way onto the beach. The water was a bit cooler here. In no time, 2 large rays were swimming back and forth in very shallow water. One was missing a tail. The rays come close as the fishing boats come in and they want to feed on the scraps of the abalone. If you put your hand out, you can pet them. They are quite large, maybe one metre in diameter?

We went to a local brewery for a drink before getting take out Chinese food for dinner back at Janice and Bill’s. The evening was filled with good conversation but I had to get to sleep early as jet lag was already settling in.

We had a marvellous swim in their salt water pool the next morning then went to a local cafe for a big breakfast before driving south to Cape Leeuwin.

Last day in Paris. Tea at the foot of this beauty. Up the hill to look inside, then a walk down through Montmartre to see the iconic Moulin Rouge. Lunch at a nearby bistro with actual gluten free pasta! Yes please! A walk back to the Gare du Nord passing by le café Chat Noir. I can't think of anything we missed. That's a wrap!