Two weeks ago, we were showing our visitors around Fort Langley, stopping first at the National Historic Site then over to the Langley Centennial Museum to see an exhibit on WW1. As we approached the museum, I noticed some of the railings and trees had been covered with what could best be described as scarfs! Odd for such a hot time of year.

What I didn’t realize was that the Langley Weavers’ and Spinners’ Guild had a new exhibition inside – Fiber Arts A-Z. 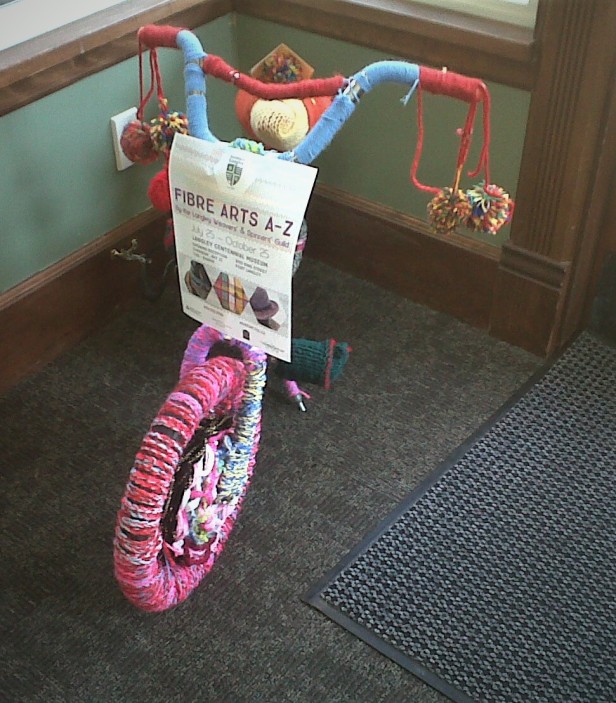 Yarn Bombing aka Guerilla Knitting: The action or activity of covering objects or structures in public places with decorative knitted or crocheted material, as a form of street art.

The exhibition featured a number of textile artifacts created by members of the Langley Weavers’ and Spinners’ Guild. Artists were asked to represent all the letters of the alphabet using their art.

“Our organizing committee wanted to have an exhibition that would include as many of our 100+ members as possible.  We liked the “A-Z” concept for that reason.  Our guidelines were minimal.  The artists were asked to pick a letter (or several, if they wished) and interpret that letter in the fibre art of their choice.  Some people chose to join forces; others worked alone.    They were also asked to provide a short statement on the project to accompany their pieces.  I think the latitude we provided created an eclectic and interesting exhibition.” – Ann Embra, LWSG

The choices were not as obvious as one might imagine.  For instance, I would have used Crochet for the letter C. But rather, they had used Cats (needle felting), Clun Forest (a blanket woven from the wool of the artist’s flock – Clun Forest being a breed of sheep), and Core Spinning (spinning for heavily textured yarn – a specific technique).

You can imagine the challenge for finding words and artifacts for X and Z! A task the artists mastered beautifully – Z is for Zombies, of course!

You can read more of this article on Fraser Valley Lifestyle Magazine. Don’t forget to subscribe and never miss a post!

9 thoughts on “Guerilla Knitting is A Thing!”

Join 538 other followers
Follow Turning my world upside down! on WordPress.com

I'm doing some xmas baking. I needed a certain recipe. When I got married in 2010, my bookclub friends gave me a lovely book filled with memories and their favourite recipes. Sad to say I haven't looked at this book in a long time. Delighted to read all their good wishes and review those recipes again. Good friends, good memories! #christmasbakinghasbegun #thanksforthememories💕