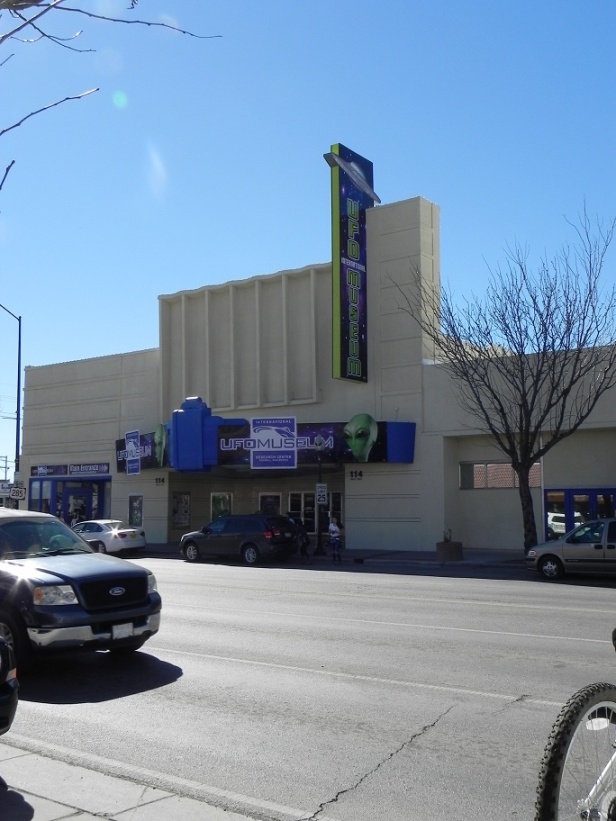 We awoke this morning to the sound of birds and yet another clear blue sky.  Carlsbad is known for its large natural caverns but at this point I wanted to move back west.  So we headed for Roswell.  That is the town known for its spaceship crash and subsequent cover up in 1947.  We went to the Roswell UFO Museum and Research Center and took time to read the news articles and testimonials from that time.  It certainly gave us something to talk about on the drive back to Las Cruces.  Leon and I both agree that something crashed in the desert that was probably a top secret government project, whether American, German or Russian.  The whole part about the little green men is really hard to believe and little evidence seems to exist on those guys.  Leon thinks there may have been injured or dead human crew manning the craft.  I also think that it would have been to the government’s advantage to keep the ludicrous stories going so that people wouldn’t suspect very advanced weapons they may have found or developed.  Anyway, it made for a quick hour and was a bargain at $6 for both of us.

From Roswell, we continued west towards our camping destination.  Along the way, I spotted a huge mountain that was entirely white.  I couldn’t figure out if it was the colour of the rocks or snow that covered it.  We drove into a town called Ruidoso and Leon mentioned snow on the side of the road.  At first I thought it was some other substance as I have been reading about the gypsum dunes at White Sands National Monument.  But no, it was snow.  It got deeper and more widespread as we drove.  The elevation of that town is over 6000 ft, so it’s not surprising it gets snow.  It turns out to be a premier all season sport area for NM.  Faced with the facts, I had to believe it was ski country, even though the temperature was in the high teens (Celsius) or near or above 70F.  One side of the street looked a bit dry and hot, the other had evergreens and snow.  Sheesh!

After looking at the map some more, I realized the big white mountain was actually Sierra Blanca, elevation almost 12000 ft!  By then, it was behind us and I couldn’t photograph it.

We then drove to Alamogordo near the White Sands Missile Range.  This is where there are large sand dunes covered in what looks like white sand.  It is actually gypsum that turns into sand crystals and creates these dunes due to the high winds.  Believe me, Leon worked out his arms today fighting those winds.

And finally, we drove in behind the San Andres Mountains to see the snow on the east side and come to our evening rest stop overlooking these mountains and the lights of Las Cruces. 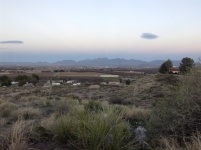 Last day in Paris. Tea at the foot of this beauty. Up the hill to look inside, then a walk down through Montmartre to see the iconic Moulin Rouge. Lunch at a nearby bistro with actual gluten free pasta! Yes please! A walk back to the Gare du Nord passing by le café Chat Noir. I can't think of anything we missed. That's a wrap!