I always wanted to see Nebraska, since we had travelled east to west and back again a few times but managed to miss the state so far.  We decided to try another winery, this one just 35 minutes outside Lincoln, the state capital.  It turned out to be a wine tasting room and restaurant and Carey, our host, was kind enough to let us park in the rear of the building for the night. 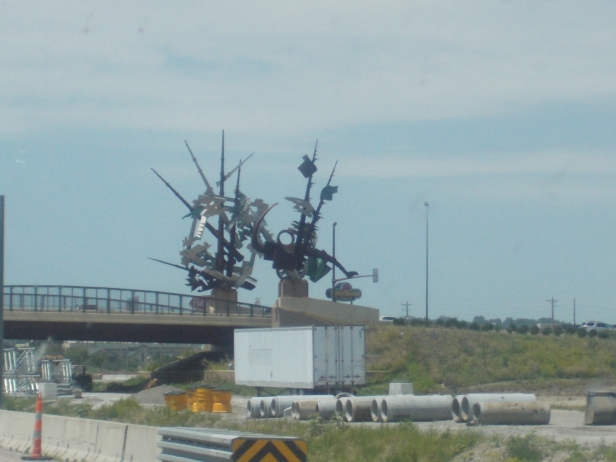 We arrived around 3pm and had some time to kill until 5pm when the Pour House opens.  So we decided to use our bicycles to tour the whole town.  It`s a rather historic little place with some old buildings and an opera house, that actually houses the Pour House.  The tasting room itself used to be a hardware store so the fixtures inside reflect some of its retail character.

After cycling around for almost 2 hours, Mike the bartender opened the door and we treated ourselves to a couple of cold beers.  We had a nice chat with Mike who used to be a set painter (artist) for theatres.  He was kind enough to let us tour some of the rest of the building which is the old opera house reception where they now hold large gathering.  The hope is to someday restore the whole building to its former glory, but that takes time and money.

The backyard of the Pour House and Opera House – Yokel Park 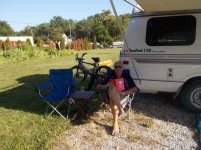 Leon still trying to figure out if he was Danish enough while barbecuing dinner – who said men can’t multitask?

We went out back to our camper and barbequed a nice dinner of pork chops and veggies and then hurried back in to the Pour House to say our thank yous and goodbyes.  I made a small donation to the historical society so Carey gave me a lovely embroidered cushion that has the Opera House image on it.

Out in the rear yard, we had noticed the wagons full of fireworks and the fire station nearby. Leon and I walked by to say hello and were promptly invited to share their July 3rd party.  We chatted late into the evening with the volunteer firefighters, including Kelly and her sister in law Meredith.  Sometime near midnight we said goodbye and got right to sleep so we could move further west as early as possible.  But on the way back to the highway, we did stop to see Beaver Crossing, a small town that had been hit by a large tornado on Mother`s Day.  Much of the damage was in the process of being repaired, including a lot of new roofs. 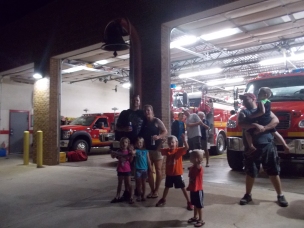 The crew at the firehouse celebrating. 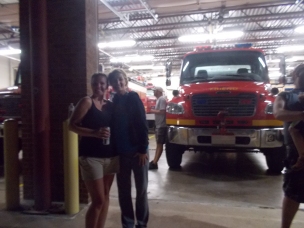 Kelly and Meredith – some of the friendliest people in Friend, Nebraska

We pointed Roadie west and headed for the Nebraska-Wyoming border to sleep in Laramie that night. 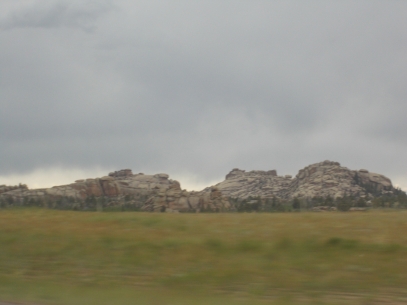 Yes, there are rattlesnakes in them there hills!

It gets dryer as we moved past Utah and into parts of Idaho. Surprising how many deserts there are in that area.

As I write this, we are in Boise, Idaho, having crossed Wyoming, a small part of Utah on the northwest side of Great Salt Lake and finally most of Idaho.  The terrain is incredibly varied from one mile to the next with grassy plains, high plains, foothills and high peaks, desert-like areas that make me sneeze, majestic mountains through Utah and green agricultural areas in Idaho which are well irrigated.  We`ve also seen a lot of wildlife such as pronged horned deer, white tailed deer, hawks and a few dead coyotes.  There is much to look at here.

We decided to stay at the Cracker Barrel in Boise, so we stopped around 7pm at a rest stop to bbq a steak.  The temperature was close to 100F today.  As I write this, it is still over 90F, at least in the van.  Let`s hope it will cool down as the sun is now set.