On Day 4, New Year’s day, I thought it would be great to try learning how to sail the small catamaran.  We got a lesson with another guest, Cecilia from Sweden, and took turns sailing back and forth in our beach area, Jolly Beach.  I had a great time and didn’t do too badly at it.  Dinner was at the Italian restaurant, a fancy affair where Leon had to wear long pants and closed shoes.  I wore the same dress as the night before, but with a shell under the top.  The food was quite lovely.  I had a vegetarian plate of grilled hearts of palm, something I’ve never tried before.  We went to bed early as we planned to go diving the next morning and I wanted to feel up to it.

My turn to sail

Leon and I chatting as we sailed along.

Notice the lovely beach behind us.

This is the Hobie Cat.

Day 5 did not disappoint.  We went diving on the outer reef, about 10 km due south of our resort.  The captain was an interesting man, originally from Indonesia, then the US, The Netherlands and now Antigua.  He made sure we were safe and wrote on a tablet under water so he could tell us what we were looking at.  We saw the remnants of a lobster (rather large), quite a few fish, conchs and some lion fish, which are a species not native to these waters.

One of the other divers was spearing them and killing them as quickly as he could find them.  He got 5 on the first dive.  The ocean was choppy so we had a lot of trouble getting back into the boat as the ladder would flop back and forth each time it hit a wave.  I was visualizing getting it in the face.  But with a little help from my diving buddy Leon and Smokie, the trusty crew member, I made it back on board, twice!  Dinner that night was at the seafood restaurant that we enjoyed, mostly for the atmosphere.  It was beachfront, but of course it was dark at that point, so we could only hear the waves crashing.  The temperature was a bit cooler that night than usual, maybe 24C, so I had to wear a jacket.  Of course, when you’ve been in the water all day, you are hungry and tired.

Day 6, Friday, we took it easy, mostly swimming, walking on the beach and reading.  I took a nice walk and did some shelling as the tide was coming in.  As I went in for a late afternoon swim, a big wave pushed me over.  I flew backwards, tumbled in the sand and had to try 3 times before I could get back up.  Luckily I was in shallow waters.  The remnant of the sand was everywhere, in my suit, my hair and my ears.  After a long shower, fully dressed, I was still finding grit on the back of my neck.  The sand continued to come out of my ears for 2 days!

Dinner that night was at the seafood restaurant again.  As we walked to the beachfront, I saw a sliver of moon, all orange, dropping into the sea.  Leon had a local lobster for dinner so we could try it.  I can’t say we enjoyed it as much as the ones we ate in the maritimes this past summer. After dinner, we took in a fire dance show as we walked back to our room from the restaurant. 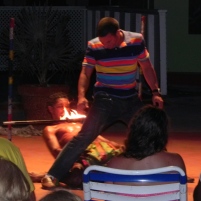 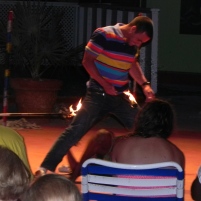 Day 7 – final day.  We spent as much time on the beach as we could, sailing the Hobie Cat again, eating a hearty breakfast, a nice buffet lunch with a beer and getting checked out for our evening flight.  I did a bit of shopping on the beach where I bought 2 bracelets and some earrings to match.  We had bought Leon some t-shirts the previous day.  The flight home was on time and uneventful except that the movie was the biography of Steven Jobs but my side of the airplane (Leon and I sat across the aisle from each other) did not have any audio for the flight.  I tried to follow the story, asking Leon questions at the most inconvenient times.  He’s a good sport though and promised to watch it with me again when I rent it at home.