During the American Civil War, the Union forces were about to put an end to the hostilities by burning a trail from Atlanta to the sea.  If you remember reading Gone with the Wind, Scarlett finds out Atlanta is burning and heads back towards Tara.  In Savannah, she encounters rebel troops fleeing the city, leaving it undefended.  General Hardee made the wise decision to withdraw his troops from Savannah, seeing the futility of further conflict.  The city was evacuated as best as possible, saving it from being burned to the ground.  In Georgia, Atlanta is the symbol of new beginnings, whereas Savannah has retained all the charm of the gracious times described in literature.

The city was planned by James Oglethorpe in the 1730s, yet it has retained that unique style with residential blocks being punctuated by smart grassy “squares”. Savannah has managed to keep 22 of its original 24 blocks, with many of the buildings intact.  Plaques on outside walls show the origins of the buildings and their year of construction.

Along the waterfront, even older structures are now taken up by restaurants, shops and stylish bistros.  The Georgia Queen, a riverboat, float gracefully along the Savannah river where cargo ships and barges have carried goods for hundreds of years. 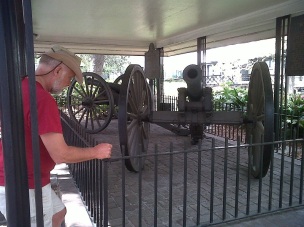 Leon and I walked through the city for a few hours, looking at statues, churches and former residences.  In one park, Leon spotted a character who looked very much like Forest Gump, even down to the suitcase on the ground beside the park bench he sat on.  It seems there are performance artists about the city to entertain tourists.

More dreadful weather on the way but these socks put me in a Xmas frame of mind. Pattern by @northwoodsknitco . I believe she might be having a sale right now. #smallbusinesssaturday #hygge #sockknitting #sockknittersofinstagram