No, I mean it literally.  We arrived in the Florida Panhandle (the part that is at the very top of the Gulf of Mexico) looking for a place to part for the night.  We settled on Navarre, just east of Destin.  At first, they had no spots for us for the night as it was the beginning of March Break.  But after 10 minutes, they had a cancellation, so we were able to park and enjoy a quiet evening. 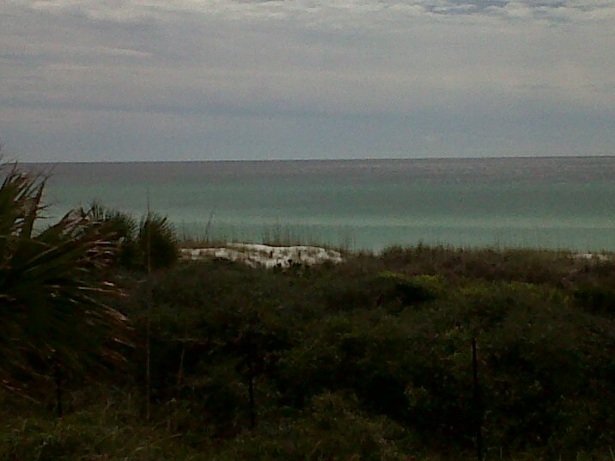 The weather was getting cloudier and cooler by the minute.  We managed a nice walk to the back of the campground to see the waterfront.  Then we went of a swim in the heated pool and sat in the hot tub for a while.  We had a nice chat with some Wisconsin college students while we thawed out our bones.

The next morning, we had a quick shower and had to check out by 11am.  Daylight Savings Time had just begun that day and we lost an additional hour as we crossed over into the Eastern Time Zone.  It was a short day driving. 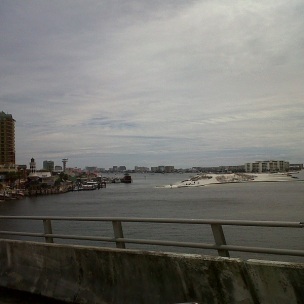 As we drove east, we were able to see more beautiful coastline, namely Destin, an island connected by roads to the mainland.  As you approach the island, you see enormous white sand dunes.  There was a huge sandbar right in the middle of what looked like a resort area.  Destin is very built up and commercial.  I can see why people would enjoy visiting there for sun and fun. But as we were driving further east, it was somewhat sunnier but so very chilly.  I heard it was only 14C in Navarre that day. I can imagine all those northern visitors, just down for their March week off, very disappointed at the poor and very frigid weather. It was a trend that followed us for the rest of the week.

We continued further as we approached Panama City.  The beaches were lined with multicoloured beach cottages as you approached.  The sand was incredibly white and fine.  The west part of the city was much quieter than Destin.  I could imagine myself spending some time there.

We stopped to make lunch in Panama City and to walk on the long beach.  People were sitting in their bathing suits, trying to enjoy some sun.  But it was terribly cold and windy for that kind of activity.  We moved on.

We finally stopped in Tallahassee that night in a campground that had us parked under some impressive old oak trees.  It got colder and dark rather quickly.  The big excitement for the night was doing the laundry.

The stop for the next day was going to be Port Charlotte where my friend Marlene was waiting for our visit.

6 thoughts on “Florida is so Cool!”

Fall rhapsody in full force as we walked through the Mackenzie King estate, down to the falls. Then off to the Nordik spa for a blissful afternoon. The view from Champlain Lookout at sunset where we are having a picnic as it grows dark. What a perfect day!