Leon and I went to buy a TV to replace the nice 42″ Samsung TV I had bought my children in 2008 as a housewarming gift.  After all, when your teenage daughter is moping because she has to move away from the only house she’s ever known, you do what is needed to bribe her.  Simple parenting skills, right?

At any rate, we ended up in the electronics store where I had a very good idea what I wanted to buy.  I figured I would just replace the existing TV with the exact same thing.  They have come down in price considerably since I bought the last one in Montana and carted it all across the continent back to Ottawa.  I had saved the sales tax by shopping in a tax free state.  That may not seem like much to you, but for me, that’s a 13% savings!

We started to look around at the TVs and found a great sale on a 50″ plasma.  It was much larger than we needed but it seemed like a good deal.  But wait! The LCD 40″ was what I had come for and after enquiring, I was still sure it was just what I wanted.  So the nice salesman grabbed one off the shelf for us and was following us to the front of the store when I got distracted by a display for a SMART TV.  I enquired as to what exactly a SMART TV could do for me.  Of course, as soon as the salesman replied that I could search the net, watch Youtube movies or use Netflix on the TV, I was sure it was exactly what I needed!  No, I don’t watch Netflix and I don’t often watch Youtube, but I spend a lot of time on Facebook and other social media.  But for real entertainment, Leon and I look at realty ads online, checking the housing market in Ottawa and the lower BC mainland, mostly.  If you are my age, you will appreciate that reading glasses are now my most important accessory, without which I cannot decipher the most basic of labels, crosswords, student assignment and especially real estate ads!!  I am always asking Leon to adjust the distance of the monitor on his laptop as we are both at different levels of farsightedness. So, with that in mind, you can imagine how excited I was to think we might finally be able to surf the net together and look at those ads in glorious 40″ screen detail. 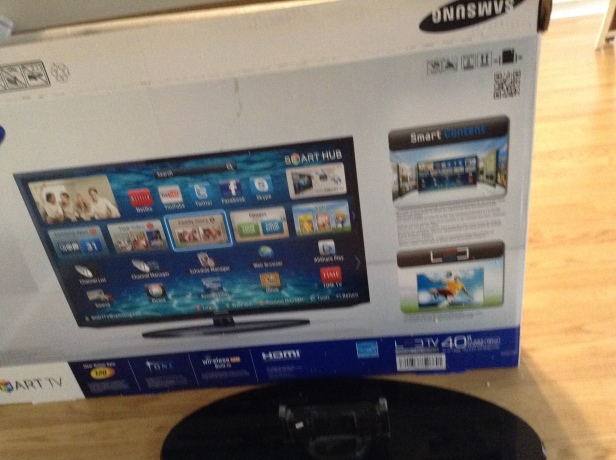 And so, we brought the Smart TV home, Leon wondering if there was anything in the box, it was so light.  We had this great idea that we would put the old TV in the new box and fool the kids into thinking they were getting a new TV.  You know, the new TV is so much smaller.  We can’t believe the difference!  Once installed, it was time to figure out how to set it up.  We now have it set on the wireless mode so that it operates just like one of our laptops.  But we haven’t figured out any of the other features.  Some of them are rather important, like how to set the volume so it doesn’t sound like the actors are talking inside a tin can.  I tried to use the on-screen keyboard and it took me about 10 minutes to type in my Facebook login and password.  Of course I pressed the wrong button and lost everything I had just typed, twice!!  In the end, I gave up trying to use any of the SMART TV features as it was past 10pm and surely past my bedtime!

9 thoughts on “My TV is smarter than me.”