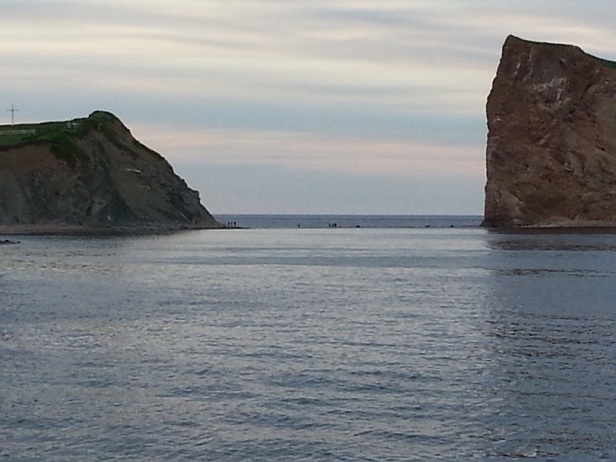 In the evening, we went down to the wharf in Percé to see the low tide.  I thought I remembered seeing people walk across a sand bar to the Percé Rock (which they are not supposed to do anymore, by the way).  As we approached the dock, we could see quite a few people at the other end watching the fishermen take in their catch of mackerel.  There was a young woman who was cleaning the fish very quickly and expertly.  I commented as such to her and asked her about mackerel, how it’s prepared, what it tastes like.  She answered me and offered me a fish to take home.  Embarrassed to decline and curious to try it for myself, I grabbed a paper napkin from my pocket (old mom habits die hard) and wrapped it around the proffered mackerel, which was nicely gutted and headless.  I walked back to the campground holding the mackerel like an ice cream cone, making stupid jokes all the way. 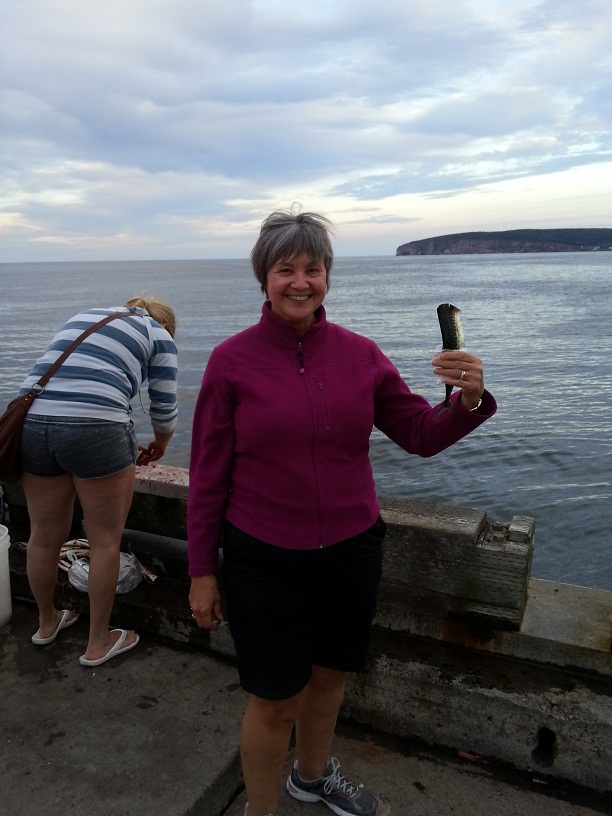 Leon brought the bbq back out of storage and I prepared the fish by stuffing it with chopped onions and some salt and pepper.  I grilled it for a few minutes till it looked just perfect.  We took it inside the camper to try as the mosquitoes have been quite voracious at sunset.  Honestly, the smell was getting to me.  I coaxed Leon to try the fish: Come on, just a taste.  He finally got out the fork and knife and tucked into it.  Meh, his face told me it wasn’t too great.  I tried a bit myself, just to get it over with so we could get the darned thing out of the camper.  I wasn’t impressed either. I thought it just had a strong taste.

Leon threw the fish out and I washed the plate while he washed his mouth out with wine and anything else he could find to kill the taste!

Now, Leon has a cool night cam that he bought in Australia for his trip to the Outback.  He sets it up each night to see if we can catch any shots of night critters, like bears.  So the next morning, when he checked the night cam footage, we found that the nicely grilled fish had attracted a black cat who seemed to have enjoyed a bite or two and then a large seagull who took a stroll around the firepit first before discovering the treat.